SHEFFIELD QUARTET HIGH HAZELS WON OVER EVERYBODY IN THE ROOM AT THE MOUTH MAGAZINE BANK HOLIDAY SPECIAL LAST NIGHT. THIS WAS A VERY SPECIAL GIG INDEED. 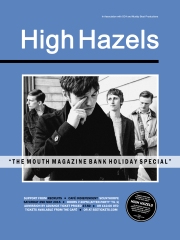 Across the ten tracks of their eponymous first album – released in Autumn last year and including the singles MISBEHAVE, BANGING ON MY DOOR and ace debut HEARTS ARE BREAKING – High Hazels walk the same neighbourhoods as fellow Sheffielder Richard Hawley on his steel city brace COLES CORNER and LADY’S BRIDGE. This is a trustworthy sound, with one ear on the swooning dancehall beat-groups of the late 1950s and early ’60s and the other on the tightly knit indie gangs of the post-Smiths era; handsome hollow-bodied guitars glisten as rhythms drive or shuffle and melodies soar. Hawley’s romantically defeated croon was vested with a dirt-in-the-groove midlife melancholy, but the High Hazels swagger with the thrill-of-the-moment buoyancy of youth; there’s something scrubbed up and out on the town about them… On Saturday nights the streets are ours -and all hearts could be decided before last orders… Listen now to highlights of their headlining set at our Bank Holiday Special, a gig staged in the week the band put out new single VALENCIA…