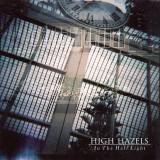 SHEFFIELD’S HIGH HAZELS RECENTLY RELEASED THE EP IN THE HALF LIGHT, A SWOONING DEBUT QUARTET OF SONGS LIKELY TO FIND FAVOUR WITH FANS OF THE SMITHS, RICHARD HAWLEY AND ALEX TURNER’S SOUNDTRACK FOR SUBMARINE.
In this new edition of The Mouthcast, frontman James Leesley discusses the band’s influences, reflects on the romantic feel of his home city, and brings us up to speed as High Hazels head off into a two week tour of the UK supporting The Crookes. With such a well-defined sound, remarkably, the tour is the band’s first, and Leesley explains why… To be in with a chance of winning a limited edition 10″ vinyl copy of the High Hazels’ IN THE HALF LIGHT EP, signed by all four members of the band, email us and mark your subject line A REET PRIZE.