IN THIRTY-FIVE YEARS OF REBEL-ROUSING, THE PUNK-POET ATTILA THE STOCKBROKER HAS AMASSED OVER 3,500 GIGS. LAST WEEKEND HE PERFORMED A SPECIAL SHOWCASE FOR THE MOUTH MAGAZINE. 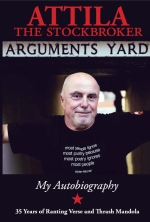 Attila (born John Baine in 1957) describes himself as a “sharp tongued, high energy social surrealist poet and songwriter”, and his autobiography ARGUMENTS YARD (published in late 2015) is true to that form. It’s a riveting run through his life and career, with is keen socialist eye turned on many of the bizarre or disturbing things he’s encountered along his way. It’s social history and personal story combined – a cultural activist’s eyewitness account of the great political battles and movements of recent times (Rock Against Racism / the Anti-Nazi League / Anti-Fascist Action / the miners’ strike / the Wapping dispute / Red Wedge / Thatcher’s Poll Tax / campaigns against two Gulf Wars)… Attila has been there, done the benefit and worn the t-shirt. His set for The Mouth Magazine covered subjects as diverse as UKIP, Donald Trump, cancer, the death of his mother, the Aberfan disaster, unusual gigs and his beloved Brighton & Hove Albion football club. This new edition of The Mouthcast features highlights from the concert, alongside a new interview recorded the following morning.