PAUL MERTON HAS TAKEN HIS IMPRO CHUMS OUT ON THE ROAD AGAIN. CURRENTLY ON TOUR ACROSS THE UK, THE FIVE-STRONG TROUPE INVENT NEW SKETCHES EVERY NIGHT BASED AROUND SUGGESTIONS FROM THE AUDIENCE. 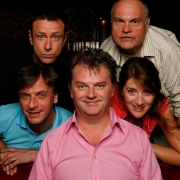 Merton, surely the greatest off-the-cuff comedy performer this country has ever known, puts his finger on why doing improvisation is quite such fun: “It’s just doing what we all do as kids – playing endless, imaginative games,” he says. “As a child, you don’t need much. I remember as a boy pushing a toy car up an armchair and suddenly it became a mountain. Kids often unpack a Christmas present and end up playing with the box. Impro is like playtime – the bit of school you liked! If you spark each other off in improvisation, it creates a really good spirit. It’s the spirit of the playground.”

Merton’s Impro Chums – Mike McShane (a regular improv partner of Merton’s on the TV show WHOSE LINE IS IT ANYWAY?), Lee Simpson, Richard Vranch and Suki Webster – are at the very top of their game. Merton, who has also gained an immense following over 25 years as a team captain on widely loved topical news quiz HAVE I GOT NEWS FOR YOU, adores live improvisation above else. “There is such a thrill in the notion of playing, say, a Bulgarian lion-tamer trying to explain in fractured Spanish that the yoghurt in the fridge has gone off. It’s a complete delight!”
In this new edition of The Mouthcast, writer, performer and troupe member Suki Webster – also Paul’s wife – discusses the current run of shows, and the nature of improvisational comedy.