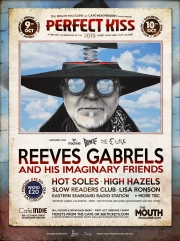 In this special double edition of The Mouthcast we present ‘a cheerful souvenir’ in the form of brief highlights of all six sets. Part One opens with a couple of tracks from the Friday night. Lisa Ronson performs SHOPPING AND FUCKING and EMPERORS OF MEDIEVAL JAPAN (the title track of her debut solo album, out early November – pre-order here). She also guests as vocalist on a version of Tin Machine’s I CAN’T READ from Reeves Gabrels’ set. Other songs featured are WISH YOU WERE HER (from Gabrels’ recent album, available here) and a mesmerising version of ACCIDENT from ULYSSES. Part Two (featuring tracks from Saturday night) begins with a couple of songs from the full-band incarnation of EASTERN SEABOARD RADIO STATION: DEATH IN THE VALLEY (from the album available here) and MAKE A CHANGE (which frontman Paul Littlewood revealed will be a single next year). Manchester’s SLOW READERS CLUB play I SAW A GHOST (one of our tracks of the year) and forthcoming single PLANT THE SEED (from album CAVALCADE, order here), while High Hazels perform FRENCH RUE and classic single HEARTS ARE BREAKING. The band have been working on new material which will be released next year – in the meantime they support fellow Sheffielder Richard Hawley in Holmfirth on 22nd October (tickets here). Hot Soles rounded off the weekend with a breathtaking rock ‘n’ roll set. Visit their website here.