THE SECOND ALBUM FROM BROOKLYN’S FIELD MOUSE (HOLD STILL LIFE, RELEASED NEXT WEEK) WAS INSPIRED BY LIVING IN NEW YORK, BURGEONING ADULTHOOD, SOCIAL OVERLOAD AND ISOLATION – AND THE REALISATION THAT LIFE GOES BY WITH A TERRIFYING SWIFTNESS.
“Everything’s going down this week / It’s history”. Through too much to drink, dingy clubs, love, loneliness, sex, subway neon, nights in and not enough to drink, HOLD STILL LIFE is often dizzy with the thrill of seizing its moment on city streets and sometimes only half catches breath with the overwhelming everything of it all. It’s such a refuse-to-be-crushed rush it feels as if it might be one of the freshest sounds of the year – despite myriad retro references.
Single TOMORROW IS YESTERDAY’s bass intro pays an uptight nod to what is loose on CANNONBALL by The Breeders, just as it propels the song into the same dark and moody wall of noise Lush leant against before deciding the charts were a brighter place to stand. A perfect two-and-a-half minutes of early ’90s controlled-fuzz-and-sweet-voice soundscaping (to call it ‘dreampop shoegaze’ wouldn’t be far wide of the mark), it pushes all the right buttons – or hits all the right pedals. In that fact it’s representative of the twelve tracks comprising HOLD STILL LIFE, as coherent and consistently pleasing an album as you’re likely to hear in 2014.
YOU GUYS ARE GONNA WAKE UP MY MOM (a late 2011 standalone single, not included on the album though it’d fit with ease) served notice that vocalist / guitarist Rachel Browne and guitarist / producer Andy Futral were doing their homework by paying pretty close attention to what made certain corners of their record collections great. Or leafing the racks in that scruffy pre-loved vinyl scene (the one next to the indie coffee house under the rusty fire escapes at the end of the block of brownstones – there must be one of those, right?) in the hope of unearthing imports of exotically long-defunct English noise bands.
As much as Field Mouse are working in excited thrall to the melodies and dynamics of the likes of Lush, Ride, My Bloody Valentine and Slowdive (each of whom was, to some degree or other, in excited thrall to the beauty of Cocteau Twins) due deference is also paid to their own country’s alternative lineage. There are elements of Pixies, Throwing Muses, Juliana Hatfield, The Breeders and Belly throughout HOLD STILL LIFE. In the case of the latter, never more so than on TOMORROW IS YESTERDAY (Browne’s Tanya Donelly-like vocal melody and voice) and KIDS (playing like a ‘lost’ song from the sun-kissed KING sessions). 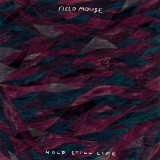 All of this is not to say that HOLD STILL LIFE is an entirely derivative sound or some inane triumph of style over substance. It certainly works hard to rehabilitate a genre often left to perish out in the cold in favour of the warm drug-shuffle before it and the cheery weekend-oi! of what came after. But, though there are other bands working roughly the same influences to roughly similar effect, Field Mouse have something indefinable – and great – about them which belongs only to Browne and Futral. The songs themselves, the clever synthesis of ideas, the perfect execution and on-the-nail aesthetics? Whichever. Perhaps HOLD STILL LIFE is what it sounds like when life does hold still for a second, and you catch sight of yourself in that indie coffee house under the rusty fire escapes at the end of the block of brownstones; the heart in the heart of the city? Whatever… Moment seized.