IN RECENT YEARS MORRISSEY HAS TAKEN TO SANCTIONING REISSUES OF HIS BACK-CATALOGUE ALBUMS. 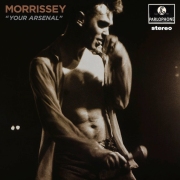 New editions of MALADJUSTED, VIVA HATE, KILL UNCLE, BONA DRAG and SOUTHPAW GRAMMAR saw altered cover art, reordered track listings (in some cases absenting songs originally included altogether) and the addition of b-sides and unreleased curios. All very nice for the completist, of course, but a rather pedantic course of action for a man purported to be, these days, happy enough in his own skin to leave the past laying as it fell.
There’s no escaping the fact that 1997’s MALADJUSTED – though perfunctory – was underwhelming in the context of its day, but 2009 seemed much too late after the fact for a perverted attempt to rescue general perception by dropping a couple of middleweight songs. Similarly the reordering of 1995’s SOUTHPAW GRAMMAR. This week it’s the turn of 1992’s Mick Ronson-produced glam-rockabilly stomp YOUR ARSENAL to suffer the “reissue! repackage! repackage!” treatment. Surprisingly, in the context of those other revisitations, almost everything about it is right.

The artwork is close to faithful, and the running order is as its day and no additions – which is a head start. The remastering revitalises beef-rockers YOU’RE GONNA NEED SOMEONE ON YOUR SIDE, GLAMOROUS GLUE and TOMORROW (though the closer is, disappointingly, only present in its US single mix – smoothed out and minus quirky music hall piano pay-off).
The Northern hair-pull WE HATE IT WHEN OUR FRIENDS BECOME SUCCESSFUL is delightfully bitchy; languid and beautiful SEASICK YET STILL DOCKED points the way to the disturbed serenity of 1994 follow-up VAUXHALL AND I; and camp-as-you-like singles YOU’RE THE ONE FOR ME, FATTY and CERTAIN PEOPLE I KNOW are the kind of essential / throwaway 45s Bowie did so well in the 1970s. Ah, Bowie… ROCK ‘N’ ROLL SUICIDE (specifically the closing “give me your hands… / You’re wonderful!” section) is lifted wholesale for Morrissey’s torch song I KNOW IT’S GONNA HAPPEN SOMEDAY. In the perfect display of pop eating itself and making a meal of it, a couple of years later Bowie covered Morrissey’s nod. Oh, how we laughed as we swallowed.

Back ‘in a band’ and strengthened by the gang mentality, Morrissey’s preoccupation with toughing out the claustrophobic atmospheres of the early 70s – his teenage years – finds bruising form in two lyrically misunderstood moments of exquisite social observation. Both are delivered in character; the football hooligan of floodlit fight anthem WE’LL LET YOU KNOW (“We’re all smiles then – honest, I swear – it’s the turnstiles that make us hostile” and “We are the last truly British people you will ever know”); and the troubled skinhead of THE NATIONAL FRONT DISCO, struggling to find any identity and purpose in an England blame-shifting ills onto immigrants (“You want the day to come sooner when you settle the score” / “England for the English!”).
That Morrissey would write from the psyche of these misfire misfits reflects only YOUR ARSENAL’s preoccupation with exploring (perhaps a construct of) the English working class masculinity of his youth. By refusing to explain his intent, though, the backlash from an already bored press was inevitable. But not entirely deserved – it was not long until similar eulogies to this noble, corrupt, beautiful and disgusting land of hope, horror, joy and ugly glory became de rigueur.

YOUR ARSENAL, then. Morrissey’s first ‘classic’ solo album; violent, vitriolic, shocking, stupid, clever, clumsy, bold, brassy and brilliant. But still seeming to be only a warm up for the masterpiece to follow.