STILL SOUNDING LIKE A CASE OF MAKE-DO AND MEND VS A MATTER OF LIFE OR DEATH, BILLY BRAGG’S DEBUT – THE 16-MINUTE LIFE’S A RIOT WITH SPY VS SPY – REACHED ITS THREE DECADE ANNIVERSARY IN MAY, AND A BUDGET-PRICED CELEBRATORY EDITION ARRIVES ON 21st OCTOBER. 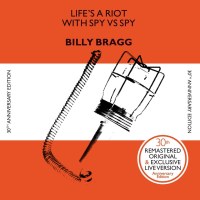 A utilitarian approach for his first solo release – only rough-and-ready vocals and sparky electric guitar – quickly came to define Bragg’s post Riff-Raff sound. So strongly, in fact, that the appearance of a full band on subsequent records can sometimes still feel like science fiction.
Making an absolute virtue of its restrictions, and with all seven songs recorded straight to tape live in the studio in an afternoon, LIFE’S A RIOT WITH SPY VS SPY crackled scruffily with the sort of all-standing excitement to be found on lower league football terraces leading up to a kick-off.
Chiming and choppy guitar backs a sincere everyman bark, and songs crash to life with little fanfare, sometimes straight into the first line. All fat is trimmed away, LIFE’S A RIOT WITH SPY VS SPY’s leanness concentrating attention on Bragg’s clever and frequently funny red-top wordplay (“I love you, I am the milkman of human kindness and I’ll leave an extra pint”).
Politicised but not yet overtly political, Bragg’s fractious unemployment and poverty see-saw in TO HAVE AND TO HAVE NOT (“just because you’re better than me, doesn’t mean I’m lazy”) is relevant in the social climate once again, while the media objectification of women tackled by THE BUSY GIRL BUYS BEAUTY also still resonates today.
Opening with a stolen line from Simon & Garfunkel’s LEAVES THAT ARE GREEN, the masterful A NEW ENGLAND highlights Bragg’s instinctive grasp of classic pop songwriting. Its beans on toast bedsit poetry manages to be both poignant and hilarious (“… though I put you on a pedestal they put you on the pill”). Bizarrely, though, the effervescence fizzing through Kirsty MacColl’s top 10 take (released 18 months after LIFE’S A RIOT WITH SPY VS SPY) achieved the feat of ensuring that Bragg’s Eddie Cochran strum will forever seem to be the cover version. 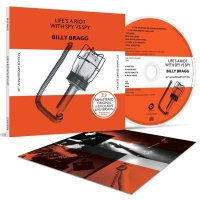 Whilst not as substantial or satisfying a package as Cooking Vinyl’s 2006 two-disc reissue, which offered up a glut of rare or previously unreleased gems, the 30th Anniversary Edition of Bragg’s debut has peculiar advantage by presenting the studio version alongside a rather poignant curio: a contemporary recording of the seven songs, as performed for an encore at a London gig this year.
Still, after all this time, no frills only thrills.