TOUCHED BY GRACE IS A VIVID ACCOUNT OF THE HIGHS AND LOWS EXPERIENCED BY GUITARIST GARY LUCAS DURING TIME SPENT WITH JEFF BUCKLEY. 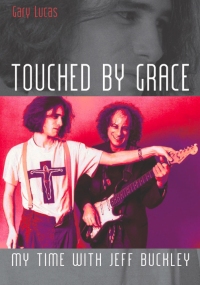 Both were members of rock band Gods And Monsters, and Lucas acted as a consultant during production of the film GREETINGS FROM TIM BUCKLEY (2012), which covered the same time period as his book. He was also a member of Captain Beefheart’s Magic Band in the 1980s, and has issued several solo albums spanning psychedelic rock to Chinese pop.
His book reflects on the GRACE star’s early days in New York, including the creation of landmark songs GRACE and MOJO PIN. Lucas writes with honesty, describing how Buckley pulled the plug on their partnership to pursue a solo deal with the very label that had cut short its contract with their band.
Buckley drowned in May 1997 and opinions have varied as to whether it was accidental, or suicide. In this exclusive extract from his book (published on 25th October), Gary Lucas describes the last time he and Buckley met.

The phone rang on the afternoon of Friday May 30th 1997. The caller was my friend Michael Shore, a writer who worked for MTV News.
“Gary, have you heard the news? Jeff Buckley’s been missing down in Memphis since yesterday.”
What? Jeff, missing? Was I hearing correctly?
“Apparently he jumped fully clothed into the Mississippi River yesterday for a swim, right before he was due to meet his band flying in from New York to start his new album… and he’s disappeared. They think he’s probably drowned.
But they haven’t found a body yet.”
I listened closely, asked a few questions, and hung up a few minutes later in a state of shock. Tears welled in my eyes. It seemed unreal. Unreal, but not so unbelievable.
I’d just seen Jeff a couple of months earlier, playing a solo show at the tenth anniversary party for the famous Knitting Factory club. He had invited me onstage, and we’d played our song GRACE – the title track on his one and only studio album for Sony. I’d given him the music for this song in 1991, back when he agreed to be my lead singer in my band, Gods and Monsters.
He hadn’t looked very well at the Knit. Haunted and puffy-faced, his formerly lithe, muscular body gone slack, he spoke with me briefly before the show, and in a subdued voice, weary with sadness and despair, he told me about all the problems that were consuming him, expressing profound unhappiness with his group, his management, and his label. 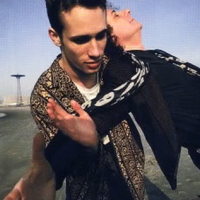 “You have no idea how horribly fucked everything is for me right now,” he said, cataloguing the many miseries in his life and career at that moment.
As he walked up the stairs to his dressing room, he turned and shot me a look of pure, helpless grief.
A pitiable look, a cry for help. My heart went out to him, my former partner, my greatest collaborator, my lost friend.
But then I hardened my heart. I’d seen that look before. Jeff could be both genuine and manipulative at any given time, and sometimes both aspects were present simultaneously.
I had to stay wary. He’d burned me before. And now here was that imploring look again, but etched much deeper in the haunted lines of his face, much graver – and much more to be taken seriously. It was a look that screamed, “I’m in trouble! For God’s sakes, please help me!”
But really, what could I do at that point?
Jeff wasn’t a kid any more. He was a 31-year-old internationally adored pop star who made young girls swoon and men and women fall in love. A Golden Boy.
His landmark album, GRACE, had been praised to the skies when it was released in 1994. He was a favorite of critics and musicians such as Bono and Jimmy Page, and he was even named one of the 50 Most Beautiful People in the World by PEOPLE magazine.
But he was approaching a watershed moment in his career – and he didn’t have a kid’s in-built excuses for fucking up.
He’d been given opportunities any artist would kill for, with the world’s biggest record company catering to his every whim; given a gargantuan budget with seemingly no cap on it, and all the resources available to make GRACE a worldwide hit.
And yet it hadn’t quite worked out for him. The record hadn’t done the numbers needed for the giant corporation to even begin to recoup its considerable investment in his talent. 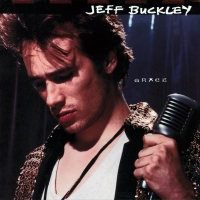 The pressure was on, and plagued by doubts, insecurities, writer’s block, drugs, and whatever other demons were driving him, Jeff was now a ghost of his former self.
It was crunch time, with all the attendant stress now of having to create the big follow-up album, the hit record that would redeem him with the big multinational label once and for all – the album he’d been unsuccessfully trying to write for the three years that had passed since GRACE was released.
That night I saw flashes of rage, confusion, and sorrow wash over him – and also total ecstasy when he invited me onstage to play GRACE with him in the middle of his set. He began soaring, singing his heart out, and for a fleeting few moments we were rocking in rhythm, back to the white-hot creation that had first brought us together.
But everything was disintegrating around him. This was clear to me.
The Knitting Factory performance offered a brief respite, but not redemption.
That night, after talking to my wife about what I had seen and felt from my friend, we agreed that the best course of action was

for me to stay cool and let Jeff reach out directly to me if he really required my assistance – musical or otherwise. When he did, I’d be there to help. That was always the way it had worked in the past.
Five months later, the phone rang.
But it wasn’t Jeff.

To coincide with the publication of TOUCHED BY GRACE (MY TIME WITH JEFF BUCKLEY), Gary Lucas will be touring the UK in November. He’ll be reading extracts from the book and performing the songs he wrote with Buckley, plus other highlights from his career.