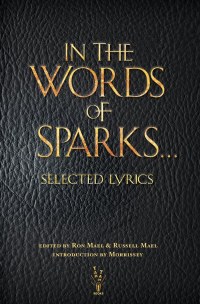 Published by discerning California-based imprint Tam Tam Books (run by Tosh Berman, who previously authored SPARKS-TASTIC – a chronicle of the band’s 21-night / 21-album residency in London in 2008), IN THE WORDS OF… contains 76 sets of Ron Mael’s lyrics chosen from 22 albums.
The 200-page volume has been produced with the cooperation of the Mael brothers and, satisfyingly, without any Chinese whispers along a record company design chain, writer Ron has been afforded an opportunity to fix errors long-standing on inner-sleeve lyric sheets of the band’s albums.
Morrissey – who, a decade before gracing the NME as Morrissey Of The Smiths, smudged its inky pages as Steven Morrissey Of Stretford in a letter erupting with juvenile passion for Sparks’ imperious 1974 release KIMONO MY HOUSE – graces this new publication with a much more reasoned but similarly impassioned essay as introduction. In it, he amuses with a description of first hearing the band’s curious wit (when melodramatically “strapped to a wooden bed”, of course) as having him feel “… within sight of port”. 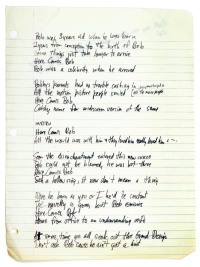 Delivered as neatly organised straight text or – a hugely appealing exercise in pop archaeology – reproductions of the original notepaper scraps containing hand-penned ideas, it’s refreshing to encounter Sparks’ lyrics cut adrift of the band’s bent-sideways sound. Clearly carefully chosen, most of the 76 selections stand up well: stripped of the veil of noise, in some are revealed deeper nuances of wordplay, or hitherto unrealised levels of ugly-beauty, silliness, sarcasm and bite.
And yet, as Morrissey says in his introduction, “… the riddle remains unravelled”.