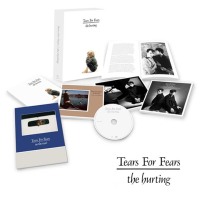 THE HURTING was originally issued in March 1983 and managed to knock Michael Jackson’s THRILLER from the top of the album charts off the back of a run of slightly twisted hit singles.
It may well have been expansively produced 1985 follow-up SONGS FROM THE BIG CHAIR which provided commercial and critical peak, but the Somerset duo never actually bettered the meticulously crafted micro-misery of their self-contained debut.
Twenty year olds Roland Orzabal and Curt Smith – both products of apparently unhappy middle son childhoods in Bath – formed angst-pop outfit Tears For Fears in 1981. The name was chosen for direct reference to the work of American psychologist Arthur Janov (as was, later, that of Primal Scream), and some of the song titles on the duo’s ten-track first album were lifted straight from his writings. With its heavily worn theme of early life distress and disconnection, it would perhaps have been more fitting if Tears For Fears’ debut had been titled SONGS FROM THE HIGH CHAIR: towards the end of the 1960s Janov had developed a treatment which attempted to resolve childhood repression through a process of re-experiencing trauma and fully expressing the resulting pain. John Lennon had once been a subscriber to his pioneering methods, the emotionally raw 1970 album PLASTIC ONO BAND – with attendant howl into the void single MOTHER – directly influenced by a programme vividly undertaken by the troubled ex-Beatle.
“THE HURTING,” says Orzabal, “has a distinct personality running throughout. In many ways it’s a concept album”… It’s certainly consistent: the title track is a deliberately unsettling drone; WATCH ME BLEED is self-pityingly melodramatic; THE PRISONER is an utterly nightmarish fever; and MEMORIES FADE is lingeringly bleak. But it’s Smith and Orzabal’s strong pop sensibilities (learned during time as part of soul / ska band Graduate and honed here) which are actually the biggest factor in successfully binding THE HURTING together – saving the record, in fact, from one-note wretchedness despite the moody overkill.
The dark disco of CHANGE, all flurrying marimbas and twanging guitar; Smith’s high notes soaring over the coolly controlled pulse-and-sway of PALE SHELTER; and the techno-soul of alienated nursery rhyme MAD WORLD are the works of stylish sonic craftsmen. Ultimately THE HURTING is a rewarding listen despite occasionally self-conscious or jarring lyrics (dismissed by some at the time as clumsy sixth form navel gazing), thick clouds failing to obscure whatever rays of pop joy break through in the 41 minutes that pass between an opening line which asks “Is it an horrific dream?” and the closer of “Is this the start of the breakdown?”

Each of the album’s four singles is represented on the second disc by its 12″ version (two cuts for twice-released PALE SHELTER) or alternate 7″ take, along with b-sides and rarities, and the third disc contains BBC radio sessions. IN MY MIND’S EYE, a concert filmed in London in 1984, is remastered for DVD (1984 conceptual footage – trees! shapes! – and all). THE HURTING (30th Anniversary Deluxe Edition) is released on 21st October 2013. Pre-order here.