SNOOPING ON FORUM PAGES OF THE MORE-OR-LESS OFFICIAL WEBSITE OF THE FALL REVEALS A THREAD DEVOTED TO ‘RECENT’ RECORDED OUTPUT. MOST OF IT IS UNFAVOURABLY COMPARED TO EARLIER ‘CLASSIC’ WORK, BUT THERE APPEARS TO BE NO CONSENSUS AS TO WHEN THE BAND ‘LOST IT’… 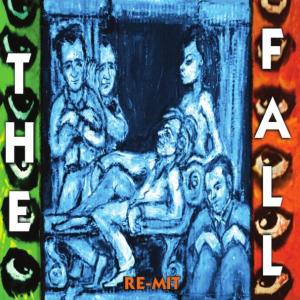 If The Fall did ‘lose it’, it was probably during the late 1990s. Depressingly, in each press interview Mark E Smith came across as a drink-sodden curmudgeonly bore, and well below-par offering THE LIGHT USER SYNDROME (1996) was followed a year later by an utter dog of an album, LEVITATE (which, incredibly, the NME marked by awarding Smith a Godlike Genius gong at The Brats).
The final straw was, perhaps, the infamous tour of America that hardly was; Smith’s drunken violence led to a night in the cells and the sacking of virtually the whole band.
So, The Fall of 2013? “Always different, always the same” überfan John Peel said, more than once, and he was right. It turns out that new release RE-MIT is as reassuring as a pair of old slippers – albeit a pair of slippers with an immovable sharp stone in each foot, of course.  Reassuring, not comfortable.
Opener NO RESPECTS (the first of two appearances, here as a brief instrumental) catches off guard with an initial similarity to The Hives’ DIE, ALL RIGHT! – but, elsewhere, the album is awash with a variety of references to The Fall’s own history. Most startling is HITTITE MAN, the vaguely middle-eastern sounding lead guitar line running through it directly descended from A FIGURE WALKS (on 1979’s DRAGNET) and VICTROLA TIME is, in musical terms, an uptempo rewrite of SLEEP DEBT SNATCHES (1987). KINDER OF SPINE, on the other hand, is a toytown slab of garage rock that may serve well as theme music should kids’ TV cartoon SPIDER ever be resurrected, while NOISE is an apparently bile-and-alcohol soaked rant that seems to suggest guitarists are people to be pitied. The stand-out is penultimate track JAM SONG, which appears to be just that – born of studio jam, rather than making any tip of the hat to Paul Weller’s first band. If this jam owes any debt, it is (again) to The Fall’s own catalogue – specifically the bridge of FREE RANGE (1992). The most arresting element is a randomly stabbing keyboard motif which serves well as extended intro but then becomes rather incongruous as the rest of the band kick in. It probably shouldn’t work, yet it does. And quite beautifully.
“Always different, always the same”. RE-MIT is yet another post-1990s album by The Fall which will join numerous others on a few thousand CD shelves, inevitably unlikely to win the band any new converts. It’s pleasing, though, to put head round door and find that the world of The Fall can still be a touch frightening – even moderately wonderful, too.