BELL X1 IS ABOUT TO RELEASE ITS SIXTH ALBUM – AND WE HAVE A TASTER.

Co-producers Peter Katis (The National, The Swell Season, Frightened Rabbit) and Thomas Bartlett (Glen Hansard, Sam Amidon) have placed the band’s melancholic electronica “in the sweet spot between wistfulness and joy” for its minimalistic sixth studio album, CHOP CHOP. The delicately layered rhythms, reverb-trailed riffs and expressive vocals of the album are perfectly foreshadowed in beautiful teaser track STARLINGS OVER BRIGHTON PIER.
“From the moment I heard the demos I knew this was a special batch of songs. The challenge was in making the recordings rich and robust without losing the fragility and intimacy that made the songs so striking in the first place,” explains Bartlett, while Katis adds: “The guys came in really prepared song-wise and performance-wise. We had a ‘live’ set-up, going for full takes. It was a slightly old-fashioned approach, without the usual digital safety net. It was recorded in just two weeks and I think that energy comes across in the music.” 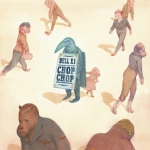 The Mouth Magazine will be covering the release of the album, recorded in Bridgeport, Connecticut, in due course. In the meantime Paul Noonan, frontman of Bell X1 (according to Billboard the second most played band ever on Irish radio), explains the thinking behind the new emptied-out approach: “We’ve returned to simpler times… When all around here was fields… Shrink the palette, you know? Chop chop!”