“GLASTONBURY, WE HAVE A PROBLEM”… LAST MINUTE VISA ISSUES FOR SREY CHANNTHY PUT PAID TO CAMBODIAN SPACE PROJECT’S PLANNED 2015 BLAST OFF. THEIR OPENING DAY FESTIVAL APPEARANCE STALLED ON THE LAUNCH PAD BECAUSE OF COMPLICATIONS WITH THE PAPERWORK NECESSARY TO FREIGHT ONE OF THE MOST PRECIOUS CARGOES ON THE PLANET FROM ONE SIDE OF IT OVER TO THE OTHER. WHEN IT SHOULD HAVE BEEN WELLIES AND WORTHY FARM, THE CHARISMATIC ‘BORN TO PERFORM’ SINGER SPENT A RATHER FRUSTRATED AND LONELY DAY KICKING HER HIGH HEELS IN AN AIRPORT HOTEL SOMEWHERE OUT IN THE MIDDLE-EAST… IT’S NOT EASY, ROCK ‘N’ ROLL… 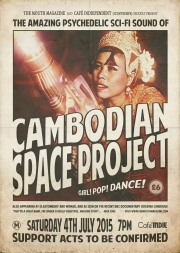 And so history now records that the first gig on the pop-psychedelic ’60s showband’s brief UK tour was a showcase for The Mouth Magazine 24 hours later. Worthy Farm’s loss was Scunthorpe’s gain. It’s a Northern industrial town not, perhaps, previously recognised for any contribution to celestial travel, but this particular audience was transported upwards – and out of itself – at great speed. The band’s 90-minute set featured many key songs which have made CSP such an attractive proposition over the last half-decade; HAVE VISA NO HAVE RICE (oh, the irony), Pan Ron’s KNYOM MUN SOK JET TE (I’M UNSATISFIED), WHISKEY CAMBODIA and A-GO-GO amongst the finest. Unrehearsed but giving a lesson in hard-walled garage-rock, UK-based part-time members David Webb (drums) and Tolly (bass) orbited the Phnom Penh command core Julien Poulson (guitar) and Channthy, while generating the level of dizzying excitement which must have swirled throughout those intense early sweat-club sets by the great Ike & Tina Turner. During this new edition of The Mouthcast (featuring a half hour of highlights from our Cambodian Space Project gig), listen out for HAVE VISA NO HAVE RICE in particular… You’ll hear that parallel at its most explicit. 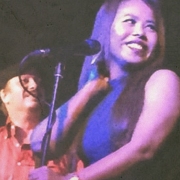 It would be patronising to suggest that to understand the Cambodian Space Project you must also understand what happened in Cambodia almost fifty years ago – the band’s very groovy rock ‘n’ roll can speak for itself. Yet the effect of Pol Pot’s attempt to revert to an agrarian society – achieved by genocide, including the destruction of culture by killing 90% of artists – simply cannot be ignored. It features heavily in the moving CSP documentary NOT EASY ROCK ‘N’ ROLL (a truncated version of which was broadcast by BBC television earlier this year) and, in The Mouthcast, Julien and Channthy talk about where CSP’s retro-rocket music comes from. Between gig and sitting down a week later for this chat came a day of filming at CSP’s UK mission control – a video session (see below) with new guitarist Jason Shaw, designed to complement the tour by showing the band’s mellower side…