THE SUNDAY SPECIAL – OUR THIRD LIVE CONCERT – WAS STAGED LAST WEEKEND. HEADLINER RACHEL SERMANNI FEATURES IN THIS SPECIAL EDITION OF THE MOUTHCAST FEATURING HIGHLIGHTS FROM THE CONCERT ALONGSIDE A NEW ‘CATCH-UP’ INTERVIEW.

Carrier bags on slow-motion pins-and-needles push into hands, I’m strolling along the pavement at the side of tonight’s venue after visiting a supermarket to make sure that there is fresh ginger and some coconut water for the dressing room. Though it was neither offered nor requested (in fact, the modest requests were simply ‘water’ and then ‘hot water’), I’d resisted the curious urge to buy some cinnamon, also. In my head I have been turning over thoughts of a conversation with Rachel from almost a year ago. About unorthodox diet. And Chinese medicine, in which the state of emotions and the physical health of certain organs are inextricably linked. And acupuncture. Pains and needles. At the same moment, Rachel and Tom Terrell’s tour vehicle corners the street ahead of me and pulls in to park at the side of the road. It is vulgar angle and minor adjustment, at first – like tuning up. But eventually it stops with one back wheel very slightly kerbed. What subtle key is this car in?
It is all ‘hail fellow well met’ as Tom steps out from the driver’s door, removes cap, ruffles stubble and stretches off their trip from Leeds, where they have performed the night before. As he opens the boot of the SUV so we can begin loading in equipment to the venue straight away, a small circle of light appears between tightly-packed luggage and the essential tools of a musical trade, as if a moon against a night sky. The boot’s pneumatic hiss has gently alarm-called, a soft hand on the hard shoulder. Through the gap in the gear I notice a tide of hair against the back head-rest, and Rachel uncrumples from moments of stolen troubador sleep. She blinks and grins. And grins. And blinks. Big eyes wave into a welcome as easily, as willingly, as they climb into whichever observing lens. Once more my brain Instagrams the moment. It has been only four months since The Mouth Magazine’s Autumn Special gig, which she headlined, and this is just a tiny reunion. Hugs, cheek-kisses and smiles. But it is great to see her and it is great to see Tom. They elevate and this is sure to be another one of the good days. Hail fellows well met. 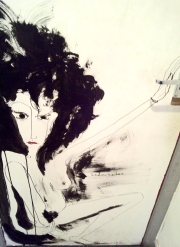 Gear is safely piled into the basement gig room and reintroductions are happily made to whichever staff have arrived to prepare for tonight. There is quite some excitement in the air. Chattering. Peppermint tea and coffees are requested and I walk Rachel through to the dressing room as Tom unpacks guitars, mandolin and banjo and chats with the venue’s sound engineer. As we pass the stage she comments on the ambient ‘mood lighting’ behind our regular backdrop (in truth, an out-of-commission parachute). Earlier in the afternoon I had covered the wall behind it with lots of little decorative lights, to become a night sky, and positioned standard lamps over towards one side of the stage, to represent the moon. Two large pot-plants at either end of the stage act as a forest top. A reasonably subtle way to sympathise with the title of her forthcoming second album, TIED TO THE MOON – and to bring some of the outside in as she will bring some of the inside out. The effect is glowing and blurry and Rachel seems content in this basement space which, with sofas and candles later, will be filled with warmth and the soft-edges of communal goodwill.
I give her a gift as a thank-you for coming to play. It is a copy of Viv Albertine’s affecting memoir CLOTHES CLOTHES CLOTHES MUSIC MUSIC MUSIC BOYS BOYS BOYS, which we have briefly mentioned in an e-mail exchange. It is purposely chosen to be a listening ear. Or a shield. Or a map. Or a door. Just over the cusp of a new stage in her life, Rachel has elected to self-manage after several years closely affiliated with (and protected by) the manager who has guided her since initial forays into the business. The book is an effervescent reading of female life, of artistic life, of doing it for yourself life, of lessons learned and of lessons fought for – and it records proof that doing things wrong can sometimes turn out to have been doing things right, and that doing things right can sometimes turn out to have been doing things wrong. All possibilities and all directions. Rachel seems pleased and is grateful – and comments that the vintage photograph on the cover shows Viv to be a “very cool lady”. It feels good indeed to connect them; it feels important. Rachel currently has a book in the reading but, as we delineate between fiction and non-fiction, she feels it is okay to start this one right away, too. Later on, after a few drinks and some family time with the staff in the wee small hours after the show, Rachel takes paints and brushes off into the female toilets and births one of her frank and beautiful ‘naked ladies’. 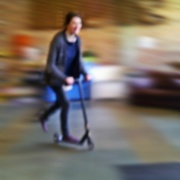 The soundcheck is long and troublesome. Technical issues dog and delay. And delay. There is stress yet nary a word is crossed between anyone. Tom and the sound engineer decant brilliance from art brain into math brain to resolve. Two sets of hands pour across the mixing console. The problem is considered, calculated, extrapolated, hunted down. And found. By this time the venue’s manager has arrived, with his daughter, and he unholsters iPhone musket to call in a gear favour which will make sure the pirate ship can sail smoother seas tonight. In the intervening wait Rachel and the daughter scooter around the middle deck upstairs. It is joyful to see silliness; two kids kidding around.
Tom soundchecks all of the pair’s instruments and the electric guitar I have borrowed from a friend for him for the show. While that is going on Rachel and I Spinal Tap from the dimness at the back of the room through a door into corridors and upstairs and downstairs to exactly the reverse of the door we have just been standing by. We plan to record only a brief chat – to explain the delay in the putting out of her new album – which will be used to precede highlights of tonight’s gig in a new edition of The Mouthcast. For the first time in the various recorded talks we’ve made – perhaps it’s the evening’s nervous energy fizzing up and the opening of the doors fast approaching – we actually stick to our plan. And, as I click the recorder to ‘off’, we both seem surprised to have managed to do so. At a later date, we say, we will talk about TIED TO THE MOON properly. And now Rachel soundchecks, running through some of her older material and one or two newer fragments. Venue hubbub falls to a total hush as we film a couple of things – a brilliant cover version and one of the songs from Tom’s solo album – for a forthcoming video session.

And then It Is On And It Is Happening… 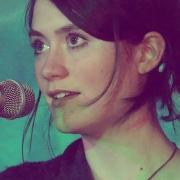 And, as at our Autumn Special, people are absolutely enchanted throughout. By Rachel’s stories of childhood ceilidhs and of touring Ireland and encounters with Buddhist monks at petrol stations. By her idea to pass lemons around so that everyone can share the bitterness in a certain song. Mostly, though, they are enchanted by her exquisite voice. And unpinnable sound. It is both contemporary and ancient. There is some folk music in there, for sure, but there are also flavours of blues, jazz, ragtime. There is a TARDIS upstairs on the venue’s mezzanine level and once or twice I find myself wondering if we haven’t somehow time-travelled to the 1940s; radiogram crackling, kettle whistling. Washing-line blowing, sun shimmering. Tea dress rippling, hair cascading. Sepia.
She dedicates a song to pal Jen Austin, who played piano with her here in November, but who is now in India. It is sweet and funny and lilting and admiring, and has a great line with the word “conceived” in it. To hear old favourite MARSHMALLOW UNICORN is special and, later, Tom’s Telecaster texture on THE FOG is dark and dangerous. Closer THE OLD LADY’S LAMENT, a new song, raises by now familiar notions of Rachel. Here is what seems to be a wise head on young shoulders. Or a young head on wise shoulders. Depending on mood. Depending on whim or circumstance. Depending on which toys or pals might be close at hand. Her writing is sensitive and – quietly, modestly – it is certainly amongst the finest around. Turns of phrase, turns of fortune. She’ll make you cry, she’ll make you laugh. It’s a great trade off. Upstairs afterwards, around the busy merchandise table, it is talk of all moods but people are drunk with joy. Someone tells me that they had found themselves wet at the eyes more than once, and each time turned for a little support only to find their companion also in tears. Someone tells me they had not heard of Rachel before our concert and cannot believe what they’ve just experienced. Someone buys a copy of everything on sale, turns to me and holds up the fat pile in his fist, saying just the one word: “Treasure”. Someone grins loudly, good-naturedly ridiculous, a bulldog puppy possibly excited to have been drinking wine outside of the confines of church on a Sunday. He asks Tom to autograph his album but insists – demands, in fact – that it is also signed with something along the lines of “an old timey fuck off”. Tom obliges, pushes cap back on his head, eyes dance, laughing.
Rachel chuckles, sipping at her peppermint tea. Our eyes meet briefly and we smile and I cannot help but think of Viv Albertine and all of those things she has seen and all of the people she has met. The long journey she has made as a woman, and I think about Rachel nearly four decades behind, somewhere at the other end. I recall writing, after we first talked just a year ago in York, these words: “I’m left with the most curious sense of elation – for her, for all good things the days between now and then are sure to bring”. Here she is, on one of those days. Setting off again. After a couple of glasses of red it strikes me that this may very well be the only room on the planet in which every single person is this happy at the exact same moment – even if ‘the exact same moment’ is only the slenderest sliver of time. I look over at the TARDIS and I hear the feint tick-tock of melancholy. And I laugh.

The first part of this two-part edition of The Mouthcast featured highlights from Tom Terrell’s supporting set, and can be heard again below. This second part features a brief interview with Rachel followed by a half-hour of highlights from her performance at The Mouth Magazine Sunday Special. Alongside MAYBE NOT (from 2013’s THE BOATSHED SESSIONS EP) and the classic MARSHMALLOW UNICORN (from 2012 debut album UNDER MOUNTAINS), in this podcast she performs new songs WONDER WHAT YOU ARE, THIS LOVE and THE OLD LADY’S LAMENT.

Pre-order TIED TO THE MOON here