A DVD FEATURING ROBERT ELFSTROM’S 1972 DOCUMENTARY ON FOLK SINGER PETE SEEGER (OUT NEXT WEEK) TIME-CAPSULES AN ERA OF SOCIAL DISCONTENT AND ACTIVISM IN AMERICAN HISTORY. 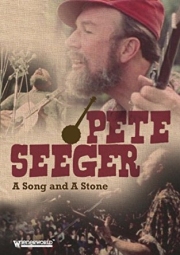 On 4th July 1776 the American Declaration Of Independence was drawn up. Amongst the admirable tenets by which all future generations were bound to live was: “We hold these truths to be self-evident; that all men are created equal; that they are endowed by their Creator with certain unalienable Rights; that among these are Life, Liberty and the pursuit of Happiness; that to secure these rights, Governments are instituted among Men, deriving their just powers from the consent of the governed; that whenever any Form of Government becomes destructive of these ends, it is the Right of the People to alter or to abolish it… …that when a long train of abuses and usurpations evinces a design to reduce them under absolute Despotism, it is their right, it is their duty, to throw off such Government”.
It’s there on paper at the very formation of the United States of America – the Government merely custodians of the duty to govern, with the higher power and authority vested in the people by the Founding Fathers. Broadly speaking, history teaches us that all regimes become entrenched, spewing propaganda and keeping the governed distracted (the Roman Empire’s ‘bread and circuses’ in degrees of action) while they continue about their often self-serving and dark business. In the modern age it’s a far more sophisticated and precarious process but the idea is essentially the same – fast food and TV. Occasionally, there is an event which breaches the bubble of ignorance (or apathy) and so inflames the governed’s sense of morality it becomes an axis for potential change. At this point the regime’s motivation is defence of the status quo, and its method the use of agencies at its disposal to reject moves to be ‘thrown off’. Made when Pete Seeger was still blacklisted by all major media organisations following McCarthyism, A SONG AND A STONE culminates with his involvement in one of the huge (12,500 were arrested in a single day) early 1971 marches on Washington DC to protest against the government over America’s continued involvement in the war in Vietnam.

There is a sequence which puts any caricature of Johnny Cash as the mere self-inflicting wild man of country rock to the sword. Defying the television network which broadcast his popular weekly show, the Man In Black invites Seeger to perform and they duet on WORRIED MAN BLUES. His songs feature throughout – A HARD RAIN’S A-GONNA FALL, WASN’T THAT A TIME and WE SHALL OVERCOME amongst them. It’s apparent how pivotal a figure Seeger (himself influenced by Woody Guthrie) was in the musical zeitgeist shifting away from pop inanity and towards social awareness and the sense of responsibility. Bob Dylan and Bruce Springsteen owe a particular debt.
At a human level A SONG AND A STONE reveals him to have been a reasonably gentle man of vivid conviction – a hands on environmentalist, navigating his Clearwater sloop in an effort to clean up the Hudson river (a programme he co-founded which continues to this day). He died in January, aged 94; a life well-lived in the name of peace, justice and dignity. In mid-2014, as the planet once again teeters on the brink, the forty year old A SONG AND A STONE is a timely reminder that Seeger’s country was partly founded on the power of the people – the notion that it is the right, the duty, of the governed to throw off despotic Government. As friend and admirer Billy Bragg would later say, “wearing badges is not enough”.

Order A SONG AND A STONE here.