“PLEASE DO NOT READ THE LYRICS WHILE LISTENING TO THE RECORDINGS” –  ADVICE FROM JARVIS COCKER IN THE SLEEVENOTES FOR PULP ALBUM HIS ‘N’ HERS. LYRICS SPANNING THE ENTIRETY OF COCKER’S DISCOGRAPHY WERE EVENTUALLY COMPILED BY FABER & FABER IN 2011 BOOK MOTHER, BROTHER, LOVER. ALMOST TO THE LAST THEY STOOD UP INCREDIBLY WELL WHEN REMOVED FROM ORIGINAL INTENTION AND TYPESET AS WHAT HE GRUDGINGLY CALLED “POETRY”. THIS OCTOBER FABER & FABER RELEASE TWO NEW VOLUMES OF LYRICS AND WRITING FROM VASTLY DIFFERING ARTISTS – BUT BOTH OF WHOSE WORK HAS SOMETIMES BEEN REFERRED TO AS “POETIC”.

SO THIS IS PERMANENCE – edited by Jon Savage (author of ENGLAND’S DREAMING, perhaps the definitive text focusing on the original punk scene) – presents the intensely personal writings of Joy Division’s Ian Curtis. Interspersed with the song lyrics are previously unpublished facsimile pages from Curtis’s notebooks, which throw his highly emotive and intense words into fascinating relief and cast light on the creative process of a singularly poetic songwriter. SO THIS IS PERMANENCE also includes a new foreword by his widow, Deborah.
One of the most enigmatic and influential songwriters and performers of the late twentieth century, Curtis was born in Stretford in 1956 and grew up in Macclesfield. His band were formed in late 1970s Manchester – a once flourishing industrial city in decline – but transcended punk roots, in no small part due to their frontman’s truly extraordinary writing. The intense, mesmerising, bleak and beautiful songs of Joy Division were the songs of Curtis’s inner tragedies; depression, epilepsy and debilitating stage fright. The band recorded two albums – UNKNOWN PLEASURES and CLOSER – and a handful of singles including TRANSMISSION and the enduring LOVE WILL TEAR US APART. Curtis hanged himself at home on 18th May 1980, on the eve of the band’s first US tour. After his suicide the remaining members continued on under the name New Order. Bass player Peter Hook discussed both bands in a recent edition of The Mouthcast (listen again, here). SO THIS IS PERMANENCE will be published on 2nd October by Faber & Faber in a 308 page hardback edition, priced £27. Order here. 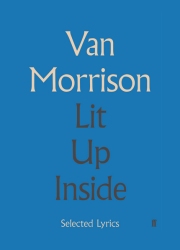 Also published on October 2nd, LIT UP INSIDE compiles a representative selection of lyrics from Van Morrison’s 50-year career – including his time as frontman of Them and the 33 albums since 1967 solo debut BLOWIN’ YOUR MIND. Around a third of the Belfast songwriter’s work is included.
Readers will find the best examples of all the features of the world that Van Morrison has brought into being through his work: the back streets and mystic avenues; memories of childhood wonder and of adult work; the chime of the church bells and the playing of the radio; the joy of solitude and the hymns to the silence; his songs of love and sharp dealing, and of consolation and grace.
Two special editions of LIT UP INSIDE are being published alongside the standard 224 page hardback (order that, here). The Limited Edition (250 copies printed; clothbound and slipcased, signed by Van Morrison on the limitation page) can be ordered here. The Deluxe Edition (only 50 copies printed; clothbound, presented in a Solander case, signed by Van Morrison on the limitation page and also including a print reproduction of hand-written lyrics, signed and numbered) can be ordered here.