BROOKLYN FOUR-PIECE FIELD MOUSE RELEASE DEBUT ALBUM HOLD STILL LIFE IN JULY, AND A FIRST SINGLE FROM IT HAS JUST BEEN RELEASED. STREAM TWO SHIPS, ABOVE. 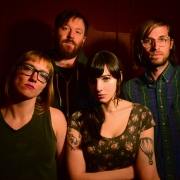 The New Yorkers combine coy ’60s dream-pop with shoegaze wall of fuzz, blending reverb-guitar and keyboards with saccharine melodies and blissed-out vocals in a beguiling mix of light and dark / happy and sad / sweet and sour… It’s somewhere in the vicinity of Velocity Girl, My Bloody Valentine, The Breeders and Sonic Youth, and it’s an aesthetic Rachel Browne (vocals, guitar) and Andrew Futral (guitar) have spent years refining since first getting together in 2010.
The pair eventually rounded out the band with Saysha Heinzman on bass and Tim McCoy on drums, and released debut single YOU GUYS ARE GONNA WAKE UP MY MOM in 2012.  It was followed by TOMORROW IS YESTERDAY, GLASS and a cover of FALLING (the TWIN PEAKS theme, written by Angelo Badalamenti and director David Lynch and originally performed by Julee Cruise).
Inspired by living in New York, burgeoning adulthood, social overload and isolation, and the realisation that life is going by with terrifying swiftness, the band grabbed the moment and recorded their debut album in Brooklyn in late 2013. HOLD STILL LIFE will be released by Topshelf Records on July 22nd. Pre-order here.