NO PARLEZ – PAUL YOUNG’S DEBUT ALBUM, RELEASED IN JULY 1983 – WAS A FIXTURE ON THE UK CHART FOR TWO YEARS. IT SAT AT TOP SPOT FOR A TOTAL OF FIVE WEEKS AND, HAVING EVENTUALLY SOLD CLOSE TO A MILLION, WAS CERTIFIED TRIPLE PLATINUM.

Listening back to it three decades later – purely on its own merits as a piece of work, so gagging aesthetic and cultural prejudice with a pair of day-glo socks – those seem unlikely statistics.
Sleek hit-seeking missiles COME BACK AND STAY, LOVE OF THE COMMON PEOPLE and WHEREVER I LAY MY HAT (THAT’S MY HOME) were issued as singles in precise radio-aimed edits. They sold NO PARLEZ – and sold it big – but give a misrepresentative account of what is, on its own terms, actually quite a bizarre record. In fact, they’re just about the only tracks on it which could conceivably have been issued with a hope of chart success.
CBS almost certainly signed Young in the confidence that his good-time grounding as the frontman of Streetband and The Q-Tips would translate into a steady run of session-backed standards as solo hits, that he would “make the LP The Q-Tips never made”, and that nice-young-man-next-door appeal would take care of their marketing for them. The label was intent, perhaps, on little more than seeing out a contract by counting cash and occasionally tweaking a mum-pleasing light entertainment pop-machine.

A variety of front covers and woe-so-80s videos reveal Young was prepared to indulge label and play the game – but that appears to have been a trade off for a degree of artistic control over NO PARLEZ. Its perfect pop is, as unlikely as it may seem, not the anaemic white-soul-for-soulless-times most would have anticipated from the pretty face and High Street stonewash parked at the front of Smash Hits.
TENDER TRAP (flirtatious, Wurlitzing); SEX (engorged, frenetic); OH WOMEN (pulsating, intense); KU KU KURAMA (uptight, brooding, serpentine); IRON OUT THE ROUGH SPOTS (percussive, skinny); BROKEN MAN (earnest, tragic, Baroque Percy Sledge); NO PARLEZ (controlled, European, foreboding) – all peculiarities wedged between those three radio favourites.

For what it has since come to represent by dint of gloss and ubiquity – shallow, grasping, invasive Thatcherism – no-one is ever likely to wind neck in (and then back out) to praise NO PARLEZ. Nor will it often be given much due for artistic experimentation. And yet, in the context of the mainstream of its day, it’s at least interesting. A major-label debut album run through with a diverse range of influences, and plenty of adventurous boundary pushing in the studio courtesy of Laurie (Ian Dury & The Blockheads, The Durutti Column, Echo & The Bunnymen, The Stranglers) Latham’s sonically dense – though some would say claustrophobic – production.
Big gated snare, click-‘n’-pop rhythm machines, the biff-and-doosh of octagonal electro-drums, fretless and slapped bass, synthetic strings, faux-distorted guitar, bell-chime keyboards, pouting female backing vocals – and barely an inch of space… It’s of the 80s – so it’s often a matter of taste. If diversions into pre-Pro Tools chop-out club mixing and an almost ADHD sound are not anything you can live with then there’s little left – other than the very capable voice, bold thinking and some curious choices in material.

Young was clearly listening to a variety of music. On his debut, and its (layered, streamlined, but not quite as adventurous) 1985 follow-up THE SECRET OF ASSOCIATION, were songs which had been written or originally performed by Billy Bragg, Tom Waits, Anthony Moore of Slapp Happy, Ann Peebles, Jack Lee of The Nerves – and, aggravating the purists to no end, Joy Division.
An inspired choice as NO PARLEZ’s third single resulted in Young’s only UK number one. Slowing braggadocio to bleakness for a cover of 1969 Marvin Gaye b-side WHEREVER I LAY MY HAT (THAT’S MY HOME) was a masterstroke – but a template for balladry was set. The second album’s take on Hall & Oates’ EVERY TIME YOU GO AWAY 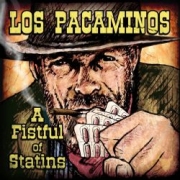 (added after the sessions had moved in ‘too dark’ a direction) caused predictably sizeable dints in the middle of several roads when issued as a single. The third album BETWEEN TWO FIRES (1986) pandered to the whims of an American market which had previously proved troublesome though now seemed interested. But it failed to ignite… Future work was guided away from early artistic risks and towards public perception of a Young as a pleasant enough prefab crooner.
In a new edition of The Mouthcast, he talks about the early years, and focuses on the recording of those first two solo records. And, on the verge of issuing a new album – A FISTFUL OF STATINS – Young also explains why the Tex-Mex band he’s fronted in parallel with his solo work since the 1990s is where he’s happiest laying his hat these days…

A FISTFUL OF STATINS is released in June. Pre-order here.