LISTENING BACK TO DEFINITELY MAYBE TWO DECADES ON FROM ORIGINAL RELEASE IS LIKE DIGGING UP ONE OF THOSE BLUE PETER TIME CAPSULES BURIED IN THE GARDEN NEXT TO GEORGE THE TORTOISE – ONLY TO FIND A HASTILY STASHED BROWN PAPER BAG FILLED WITH A FEW WRAPS OF SPEED, AN EMPTY CONDOM WRAPPER, A TAXI NUMBER SCRAWLED ON A BOOKIE SLIP, A WAD OF CRUMPLED CASH, A CHIP FORK AND SEVERAL G&T-STICKY MANCHESTER CLUB FLYERS. 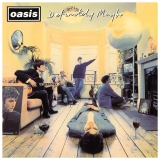 Remastered to within an inch of any line you might care to mention, an expansive three-disc edition of the unsophisticated, loud and loutish 1994 debut by Burnage ne’er-do-wells Oasis (released next Monday) explodes with the kind of take-your-chances bravado any band will only muster once. “You can have it all – but how much do you want it?”… It’s alive, and it sounds inevitable.
There will be a certain poignant nostalgia attached to hearing this youthful burst of possibility, of course (no-one’s knees are quite what they were), but ROCK ‘N’ ROLL STAR, CIGARETTES AND ALCOHOL and SUPERSONIC do still seem as if they’re happening right now next door – every next door – and spilling out onto every street. That’s some party… And everyman is invited.
DEFINITELY MAYBE was released in August 1994, despite troubled recording sessions (a complete first take of it was scrapped, sounding thin and too tidy, failing to capture the adrenal snarl). It became the fastest selling debut album ever, chiming with shifting times – moving far beyond that, even, and quickly defining a generation.
A year later Oasis would record the – arguably – more satisfying and well-rounded (WHAT’S THE STORY) MORNING GLORY?, with Noel Gallagher balancing brain and brawn to work in more detail and pastel shading, rather than repeat DEFINITELY MAYBE’s primal lines and primary colours. But the band’s ‘moment’ would soon slip by in a nobody-said-stop cocaine supernova, success breeding ridiculous indulgence, ideas stretched past breaking point of patience. Despite a couple of neat moments, the risible BE HERE NOW was exhausting. You can have it all – but how much of it should you actually have?

BE HERE NOW and its essential predecessors are each reissued this year, with companion discs featuring a glut of extra material; b-sides and so on, much of it unreleased. For the band’s seven times platinum debut, chief amongst the unearthed rarities are string section frills from Christmas 1994 singalong WHATEVER, an intimate Tokyo hotel room version of HALF THE WORLD AWAY (the Lennon skiffle b-side which found a way into homes as the theme to sitcom THE ROYLE FAMILY), a glistening acoustic run through transcendent single LIVE FOREVER and the original demo version of STRANGE THING.
There is much of interest amongst all this debris, and much of it suggesting that for eighteen months or so Noel Gallagher – inspired here, brazenly pilfering there – had the golden touch.
DEFINITELY MAYBE remains as brutal, bright, swaggering, gauche, dumb and dangerous as it was first time around.