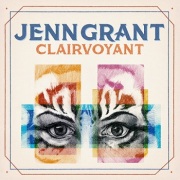 The EP is almost a ‘best of’ in miniature, featuring songs from Jenn’s undersea dream-pop side project AquaAlta and a cover version of Leonard Cohen’s cool LOVER LOVER LOVER alongside a duet with Richard Terfry (aka Canadian alternative hip hop artist Buck65).
Jenn has released four solo albums to date and garnered critical acclaim from all corners of the world. She’s performed across America, Europe and Australia and appeared at numerous festivals including Primavera Sound, SXSW and The Big Sound. Jenn plays the Islington in London (N1) this coming Monday. Tickets are available here.
She offers us a few words on her new EP (buy here)…

EPIC SWEEP: This is an AquaAlta song, so it began with Charles (Austin) and Graeme (Campbell). I love writing words and singing over top of beats and melodies.

SPADES: I love Buck 65. We’ve worked together now several times but it’s always fresh with him. It was exciting to try it this way where I wrote something first and then we carved out a space for him. We’ve just made a video together for it in Toronto.

I’VE GOT YOUR FIRE: Since I recorded this song originally I’ve always imagined having a quieter version of it. We had recorded a piano version of it – but it was another year and half or so until we decided to try recording my voice to it.

LOVER LOVER LOVER: I was looking for a song from the 70s to cover and I had recently been a bit more fascinated than usual with Leonard Cohen. This recording lends itself to a new kind of feel for me which I would like to pursue again for some other material.

NORWEGIAN JEWEL: Another AquaAlta song which began by Charles (Austin) and Graeme (Campbell) sending me the music they had come up with. All of the AquaAlta songs have dreamlike imagery that go along with them. This one’s like a tribute to my old neighbourhood in the north end of Halifax.

NO-ONE: I wrote this song by the beach in PEI. I’d just written about 25 songs to choose from for my next recording but I wanted to try writing one or two more… Beach inspired.