THE PREPOSTEROUS STORY OF POSTCARD RECORDS IS “A FAIRY TALE, NOT A DOCUMENTARY” SAYS WRITER SIMON GODDARD DURING THE FOREWORD TO SIMPLY THRILLED. 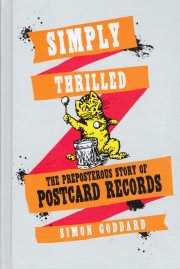 His new book is the tale of a renegade label which, with DIY ethic, gave early 1980s indie a bit of a kickstart. From punk origins to intertwining kitchen sink dramas featuring Orange Juice, Roddy Frame and Aztec Camera, The Go-Betweens and Josef K, for SIMPLY THRILLED Goddard has interviewed all involved in striking the label’s legend.
The author’s stitching together of often contradictory accounts and tall tales (“Just print the legend. You have to!” and “Stick that in – it sounds better” he’s told) makes for a wealth of unlikely yarns – and that “preposterous” subtitle. SIMPLY THRILLED is a sometimes scarcely believable farce interweaving backstabbing, youthful vigour, disillusionment, gluttony, epic lunacy, cheap speed and knickerbocker glories. It’s also the story of creating something enduringly beautiful from out of nothing – and against all odds. “Valiant purists” Edwyn Collins and Alan Horne used a sock drawer for an office, had dreams on a scale common sense should not have allowed and little money when they began Postcard from a shabby flat shared with the tail end of grim late-1970s Glasgow.

SIMPLY THRILLED is no basic nuts-and-bolts, rags-to-riches record label biography. A sad / funny prologue – the story of Louis Wain, the Victorian illustrator whose drumming cat picture would eventually become Postcard’s logo, and who died as a madhouse pauper – seems as equally bizarre as most of what follows.
Much like Martin Aston’s FACING THE OTHER WAY: THE STORY OF 4AD and Alan McGee’s CREATION STORIES (both published last year), history acts merely as the axis for eccentricity. Goddard’s book concerns character, friendship and flamboyance: outsiders finding a way through the stultifying grey-out of the late 1970s and early 80s. Similarly, there are flashes of stupidity, madness and ego. There are mistakes and there is the odd moment of pop genius. Oh, that short run of glorious records…

Goddard writes masterfully throughout and, though the label’s music is clearer by the last of his lines despite all surrounding legends being lit-up at a scale large enough to overshadow, it is human heart which is brightest for all the ridiculousness in SIMPLY THRILLED’s telling. Like the short-lived Postcard, it feels as if it just had to be that way.

Read our interview with Simon Goddard from last year, around the release of his David Bowie book ZIGGYOLOGY, here.