SINGER AND SONGWRITER (BUT NOT SINGER-SONGWRITER) MARTIN ROSSITER ROUNDS OFF ACTIVITY SURROUNDING HIS CRITICALLY ACCLAIMED SOLO DEBUT THE DEFENESTRATION OF SAINT MARTIN WITH A NEW LIVE DVD / ALBUM. 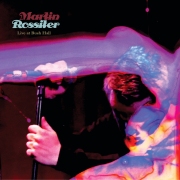 The double-disc package is a complete recording of the ex-Gene frontman’s sell-out show in London’s Shepherds Bush, on 21st June last year.
LIVE AT BUSH HALL will be released in physical format on February 3rd, but is immediately available as a download, here. Signed copies of the CD / DVD edition can be pre-ordered here.
Rossiter’s ten-minute epic THREE POINTS ON A COMPASS stands out as a highlight alongside both singles NO-ONE LEFT TO BLAME and DROP ANCHOR. Accompanied by pianist Robin Coward, all seven of the other ‘secular hymns’ from the ‘bleak and sweet’ THE DEFENESTRATION OF SAINT MARTIN are included in a 15-song live set. WHERE THERE ARE PIXELS, LET THE WAVES CARRY YOU and DARLING SORROW feature alongside I WANT TO CHOOSE WHEN I SLEEP ALONE, SING IT LOUD, MY HEART’S DESIGNED FOR PUMPING BLOOD and the raucous I MUST BE JESUS.

A handful of vintage Gene songs also appears: IS IT OVER? from LIBERTINE, the band’s final album; SPEAK TO ME SOMEONE from 1997’s DRAWN TO THE DEEP END; early b-side I CAN’T HELP MYSELF; album track LONDON, CAN YOU WAIT? from Gene’s 1995 debut, plus the title cut – and classic single – OLYMPIAN itself.

All five studio albums by Gene (OLYMPIAN, REVELATIONS, DRAWN TO THE DEEP END and LIBERTINE, plus b-sides / oddities collection TO SEE THE LIGHTS) are on the verge of release as double-disc deluxe editions containing extra material (BBC sessions, concert recordings and previously unreleased demos / outtakes).
A reunion, though, remains an extremely unlikely prospect, Rossiter not involved with the reissues and preferring to concentrate on work for a follow-up to THE DEFENESTRATION OF SAINT MARTIN.
After the string of successful gigs during 2012 and 2013, he called time on the piano and voice stylings with a sold-out farewell show at The Islington, London, in November. With a new project in mind for his second album, he stated “I need to be writing the next album – and if the last one is anything to go by, it could take quite a while”.
The evening before THE DEFENESTRATION OF SAINT MARTIN was released, Rossiter performed an exclusive live video session for The Mouth Magazine, accompanied by Robin Coward on piano, filmed at the end of the soundcheck for his Manchester gig. View here.