THREE OF THE DUO’S NINETIES ALBUMS ARE GIVEN THE DELUXE TREATMENT IN A SECOND WAVE OF EVERYTHING BUT THE GIRL REISSUES. B-SIDES, DEMOS, LIVE RECORDINGS AND PREVIOUSLY UNRELEASED RARITIES ARE ADDED TO AMPLIFIED HEART, WORLDWIDE AND THE LANGUAGE OF LIFE FOR NEW DOUBLE-CD SETS.
By release of the latter, their fifth album, in early 1990, Ben Watt and Tracey Thorn found themselves some distance from the scratchy leftfield jazz inflections of 1984 debut EDEN. The NME initially positioned the duo alongside Billy Bragg and the Redskins as politically charged ‘New Realists’ and, in her memoir BEDSIT DISCO QUEEN (published this year; review here), Thorn describes their approach of the time as “sounding like Astrud Gilberto but coming on like Gang Of Four”.

Having drifted out to what appeared to be the middle of the road by the time of their well-intentioned 1989 cover of Rod Stewart hit I DON’T WANT TO TALK ABOUT IT, Watt and Thorn felt “rejected, misunderstood and blameless” at becoming considered “a bit naff” on home shores. Bruised, and with a need to feel “forgiven”, they decamped to America to buy some of what producer Tommy LiPuma and his top team of arrangers and musicians were selling. Giving themselves up to being bit parts in the making of their own album (Thorn sang and learnt to play Super Mario Bros), the result of several Stateside weeks was an expensively produced “fully realised, immaculately performed modern American soul-pop” record.
But THE LANGUAGE OF LIFE’s acute glossiness did not serve its handful of the duo’s finest songs particularly well at the time – and certainly not now; a fact highlighted on this deluxe edition by the sparse demo of THE ROAD. It’s difficult not to wonder what might have been as, solo at the piano, Watt is absolutely on message in a plaintive performance reminiscent of predecessor IDLEWILD’s secular hymn THE NIGHT I HEARD CARUSO SING. The presence of tender moments from legendary saxophonist Stan Getz on the album version (and alternate take) lends THE ROAD a degree of hip gravitas, but a late-1980s fizz bubbling around the essentials plays as vacuous and of-its-day distracting. DRIVING (a Top 40 hit six years later, in superior remixed form), the scathing ME AND BOBBY D – an iron fist in a velvet glove – and an economical b-side cover of Tom Waits’ DOWNTOWN TRAIN are the pick.

Even at forgiving distance THE LANGUAGE OF LIFE remains Everything But The Girl’s least satisfying record, sitting alongside IDLEWILD as a mid-season slump. Released in 1991 WORLDWIDE was, according to Thorn, recorded in “fatalistic mood” and then all but ignored by the music press. “It really isn’t dreadful…” she says: “… just not good enough”. Here, it’s coupled with 1992’s ACOUSTIC EP, and actually finds Watt and Thorn a little way down the road to recovery.
In the duo’s new sleeve notes they describe it as a “diffident” and “overly meditative”. It’s certainly cautious in places, but playing to traditional strengths is its strength. Sprightly single TWIN CITES seems a logical ‘perfect pop’ extension of the aesthetic which first brought them note.
1992’s ACOUSTIC EP – with versions of Cyndi Lauper’s TIME AFTER TIME, Bruce Springsteen’s TOUGHER THAN THE REST, Elvis Costello’s ALISON and LOVE IS STRANGE by The Everly Brothers – is twee but soulful, locating a new adult resonance in each song. The plethora of extra tracks includes remixes of TWIN CITIES, live recordings of The Smiths’ BACK TO THE OLD HOUSE and Sonic Youth’s KOTTON KROWN, two versions of I DIDN’T KNOW I WAS LOOKING FOR LOVE and a cover of Simon And Garfunkel’s THE ONLY LIVING BOY IN NEW YORK, previously only available on the HOME MOVIES compilation. As they say in their sleeve notes, by the time of WORLDWIDE Watt and Thorn “have found friends again”. 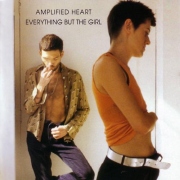 Everything But The Girl were revitalised by the time of AMPLIFIED HEART, 1994’s album perhaps their freshest-sounding record since EDEN. Watt had recovered from a rare disease – the life-threatening Churg-Strauss syndrome, diagnosed in 1992 – and associated illnesses, the experience movingly documented in his autobiographical PATIENT, Thorn’s BEDSIT DISCO QUEEN and the song WE WALK THE SAME LINE. Motivation for the artistic rebirth of AMPLIFIED HEART was provided by seismic personal events – but seismic artistic events were not too far ahead, despite the duo being dropped from their label shortly after the album’s release.
Single ROLLERCOASTER is classic acoustic pop comedown; Richard Thompson features on b-side STRAIGHT BACK TO YOU; string arrangements on I DON’T KNOW ANYTHING and TWO STAR are by Harry Robinson (who scored for Nick Drake and Sandy Denny); and the deluxe edition also highlights a live take on Jackson Browne’s wistful THESE DAYS – perhaps one of Watts’ most memorable performances in light of his preceding troubles.
Time spent working with Massive Attack and befriending Fairport Convention played their part, but it was Todd Terry’s ice-cool club mix of non-hit single MISSING which finally turned Everything But The Girl’s fortunes around. The lonely city groove became an underground sensation, slowly bubbling up from dancefloors in Europe and on America’s East Coast to global mainstream radio and the top of several charts. It was reissued with an abundance of different mixes, stayed in the UK Top 10 for three months, and sold over three million. On hearing the original album version, some may be surprised to note that Terry’s remix is not radically different. Alongside a live version from the 1995 tour, which features bassist Danny Thompson, a handful of other dancefloor reworkings are included on the deluxe edition – pointing the way, perhaps, to 1996’s electronica-oriented WALKING WOUNDED.

Despite the imposing shadow cast across this second wave of deluxe edition reissues by the success of MISSING, the story of Everything But The Girl’s artistic trajectory between 1990 and 1995 is not that of two underachieving albums and one accidental hit alone. It’s also a quietly triumphant story of realigned perspective and regained confidence.