*THIS ARTICLE WAS ORIGINALLY PUBLISHED IN TWO PARTS, AND IS COMPILED HERE FOR YOUR CONVENIENCE*

I’M USHERED IN TO A SMALL DRESSING ROOM WHERE JOHN COOPER CLARKE IS BUZZING ABOUT HAVING JUST COME OFFSTAGE, AND PICKING OVER A PLATE OF SANDWICHES WHILE CHATTING TO A COUPLE OF FRIENDS. 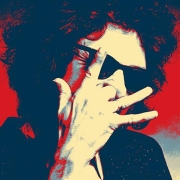 Tour manager Johnny Green introduces us, and ‘The Bard Of Salford’ offers a wiry handshake and warm grin from behind his trademark shades and Rolling Stones haircut. “Alright, kid?” he asks. “Do you want a G ‘n’ T?”… And so it begins.

A female fan leans in through the open window and shouts “Hey John… I was getting married next week – but I don’t think I’m gonna bother now,” referring to the mid-gig monologue on matrimony. He’d warned the crowd to be careful when entering new romances or if considering getting spliced, calling up a relationship which ended with him trying to explain to the other party why they were incompatible as a couple, in the end resorting to: “I’m an Aquarius, and you’re an arsehole”…

A blind fan is brought in to say hello: “What’s yer name, kid?” Clarke asks. The fan, Colin, produces a red marker pen out of a flimsy carrier bag, for his collection of CDs to be signed. The poet has already got through half of them with a biro. He takes the offering anyway, and is about to autograph the dark cover of SNAP, CRACKLE & BOP with it, but arches an eyebrow. “Hang on, here, Colin. Let’s think about this – this one’s already been signed. Are you absolutely sure you want me to sign it again?”… Colin answers “Yes, please… The other signature’s not visible enough,” and Clarke shoots me a quizzical – though not mocking – open-mouthed look over the top of his shades. He signs the CD again, this time as Doctor John Cooper Clarke, proud of his recent honorary degree from the University Of Salford. “There you go, Colin. Now signed by a Doctor – and you can’t get no better than that”.

He leans out of the window and lights a cigarette – Chesterfields, I think – and offers me one. “I’ve given up,” I say, “I’m on this” and hold up the e-cigarette I have in my hand. “Fuckin’ ‘ell, kid… No way, no way. Not for me…” he says. “Not to be detrimental to you, but giving up shows absolutely no commitment whatsoever” and bursts out laughing, smoke firing in all directions through his gold teeth. Pointing to a cellophane-wrapped plate he says “Hey, do you want a sandwich instead?”

A photographer calls him out to have his portrait taken for an ongoing exhibition of famous Manchester faces: “I’d better suck me fuckin’ cheeks in”. Spindly Clarke sits on the backstage steps which lead up to the wings, ordering the snapper to “make me look thin” and then recites a couple of lines from his poem GET BACK ON DRUGS, YOU FAT FUCK. He offers Victoria Beckham pursed lips and struggles vainly not to crease when support poets Mike Garry and Luke Wright start hurling the good-natured banter his way. “Listen,” says Johnny Green quietly, as we stand watching the photoshoot, “John’s just said he’s up for a proper chat with you – so come back to the hotel for a drink. It’ll be a lot better than 20 minutes in here”.

A few minutes later and we’re in a fairly luxurious hire car with Clarke sliding an Elvis CD into the player: “The BBC’ve asked me to go on the celebrity version of MASTERMIND. I’m filming it a week on Tuesday. So this is cramming. I’m cramming”. Presley’s beautiful voice reaches into Clarke, into all of us, as we drive through the dark. The poet sings along – as if unaware of anything else around him – then breaks off to explain: “They asked me what I wanted for my specialist chosen subject so I said films made between 1930 and 1970. Too broad. I kept narrowing it down. 1950 and 1970? Too broad. American films? Too broad. Westerns? Too broad. Alright then, British films? Too broad… For fuck’s sake, alright then… The films of Elvis Presley? And they’ve agreed on that”. He sniffs. “I’ve been watching two a day”.

Green says “The thing about John is, he’s got this amazing brain. The information he can retain is just… incredible” – and, indeed, later when we part I’m staggered as he offers up information about me that was mentioned only in passing in the first few minutes of our time together in the busy dressing room, and not again since. “Have you watched IT HAPPENED AT THE WORLD’S FAIR yet, John?” I ask; “I love that song POCKETFUL OF RAINBOWS”. Immediately Clarke sings “I… don’t worry… whenever skies above are… Yeah, that is a fuckin’ great song. Great song… Elvis! Presley!” and the streetlamps rhinestone off his sunglasses.

Minutes later we’re sitting in the corner of the edge-of-town hotel’s empty bar, and the evening begins to expand further than anyone had anticipated. Tea-drinker Green eventually retires for the night – “to take off my boots, ‘cos it’s a long drive tomorrow” – but insists on another round of Laphroaig and Guinness for John and I, first.

Cooper Clarke clinks the ice-cubes around his glass and discusses everything from liberalism, the regulation of the UK press, the Milly Dowler case and the internet, to The Sopranos and The Simpsons, The Smiths and the late great Lou Reed, to heroin and Jack Daniels. We disagree on a couple of issues and, voices raised, end up rowing for a late-night half-hour about something which we agree will remain ‘off the record’ for this edition of The Mouthcast. I discover that interviewing John Cooper Clarke can be both intense and playful. It’s also not necessarily always a participatory experience. Sometimes it requires little more than a word tossed in, a quick question, a statement or a nod to help guide the torrential flow-and-purge of his truly extraordinary brain.

Three hours later he orders me a taxi and waits with me in the hotel’s reception area until it appears. When it does he gives me the warmest hug: “… been a fuckin’ pleasure to meet you, kid” – and, as his cuban heels click on the tiles, I watch (Doctor) John Cooper Clarke totter off towards the lift. Aquarius, not arsehole.