NEXT MONDAY PUBLIC SERVICE BROADCASTING RELEASE A DVD VERSION OF ALBUM INFORM-EDUCATE-ENTERTAIN, CONTAINING A VIDEO FOR EACH SONG ALONGSIDE A FULL COMMENTARY IN WHICH J WILLGOOSE ESQ ELABORATES ON THE SOURCE MATERIAL BEHIND EACH TRACK.

Highlights of the DVD include a full debriefing on Tommy Woodroffe’s narration for LIT UP, as well as a mildly tongue-in-cheek look at past fashions in THE NOW GENERATION. For a taster, view the SPITFIRE video with commentary below.
The DVD’s many extra features include LIVE AT VILLAGE UNDERGROUND, a film of a show at the London venue in May, also including edited highlights of several other dates on the band’s I-E-E tour. ON THE ROAD WITH PSB, meanwhile, is a video diary of one of their busiest days this summer, heading to Jodrell Bank to support New Order, followed by a set at Lancashire’s Beat-Herder Festival, where they battled an AV meltdown. J Willgoose Esq and Wrigglesworth also go ‘full Partridge’, almost coming to blows over favourite service stations.
Further DVD extras are the rarely seen original promo videos for singles THEME FROM PSB and SIGNAL 30; and AN AUDIENCE WITH PSB AT THE BFI, which includes an interview about the origins of the band, the potential for a tour of UK schools, and why it is that Doctor Who’s Matt Smith owes them an apology (with PSB hopeful that Peter Capaldi won’t also steal their look).
They also rummage through footage in the Institute’s extensive archive, perhaps in search of inspiration for new material they’ve been working on – some of which will be premiered on the band’s extensive UK tour in November (see below for a full schedule of live appearances, and click on the tour poster to go to ticket links). 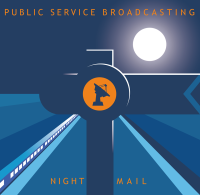 NIGHT MAIL – the final single from I-E-E – is also released next Monday, as a download or special edition 12″ EP featuring two extended mixes. Ben Gomori takes the original and twists it into an altogether funkier beast, while Baltic Fleet take their mix into Flying Lotus territory, with heavy synth washes bursting into a late night electro jam. The radio edit of the original finishes off the vinyl set, which is limited to 1,000 copies and is sure to be a collectors’ item. View the promo video, below.

PSB appeared on an edition of The Mouthcast earlier this year.
Listen again here.