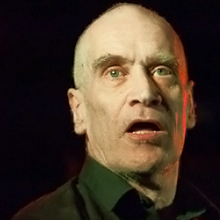 In November 2012 it was revealed that the influential rhythm and blues guitarist had been diagnosed with terminal cancer, and he undertook a short ‘retirement tour’.
“This year’s been unusual. What’s been pretty good is we did the tour earlier in the year. But then I retired,” says Wilko, “and I didn’t like that much! Summer came along and the festivals started coming in. It’s been marvellous, being out in the sun. It’s all about the friendly atmosphere. So I guess you could say my favourite thing has been fun in the sun…”
Since the 1970s, Johnson’s former band Dr Feelgood has been credited for a contribution to the British rhythm and blues scene and widely hailed as a founding influence on punk. Hear him discuss that band and his relationship with fiery frontman Lee Brilleaux – plus Julian Temple’s documentary OIL CITY CONFIDENTIAL, and time spent as a member of Ian Dury & The Blockheads – in an archive edition of The Mouthcast (below), which was recorded and first published days before Johnson’s cancer diagnosis was publically revealed.


At Bingley, Wilko Johnson will be joined by Primal Scream, Chic (feat. Nile Rodgers), The Human League, The Cribs, The Fratellis, The Neville Staple Band and Tinchy Stryder.
The festival takes place in Myrtle Park, BD16, between Friday 30th August and Sunday 1st September. Tickets are still available: a standard three-day weekend ticket is £45, with advance day tickets for Friday costing £17.50 and advance day tickets for Saturday or Sunday priced at £30. Tickets are available online at www.bingleymusiclive.com/tickets or from the hotline on 0871 220 0260. All prices are subject to booking fees.