KING AND CROSS – THE DEBUT SINGLE FROM SINGER-SONGWRITER ÁSGEIR – IS RELEASED ON AUGUST 12th.
First issued in his native Iceland as LEYNDARMÁL, Ásgeir’s single has been translated into English by John Grant and will be released by One Little Indian. At just 21 years of age Ásgeir has become a sensation in his native country – staggeringly, almost 10% of Icelanders own his debut album DYRD Í DAUðATHOGN. An English language version – IN THE SILENCE – will be released worldwide this autumn. With a deft combination of electronic and organic instrumentation, Ásgeir’s vibrant and airy songs – and distinctive voice – elevate his appeal beyond the limits of folktronica. Here, he talks to The Mouth Magazine about his work.

YOUR UK DEBUT SINGLE KING AND CROSS IS OUT TOMORROW – AND IT’S ALREADY RECEIVED LOTS OF AIRPLAY…
KING AND CROSS was always the choice for the first single outside of Iceland just because it was so well received back in Iceland. I remember it very clearly when we were recording the song because I actually never thought that it would be released because I thought it was so different from all the other songs on the album. However, after listening to it a few times when we’d finished the recordings, I changed my mind and decided that it would be released.

THE ICELANDIC VERSION IS TITLED LEYNDARMÁL… WHAT’S IT ABOUT?
Leyndarmál is a lyric that’s made with no single meaning in mind, and so it can mean different things for different people. Or just not mean anything. Those could just be sentences that flow well and go well with the song, but if you want them to make sense you probably can. A direct translation of the title would actually be SECRET.

THE SINGLE IS OUT ON ONE LITTLE INDIAN, A SMALL AND FRIENDLY LABEL WHICH HAS SOMETHING OF A TRADITION OF WORKING WITH INTERESTING ICELANDIC ARTISTS… CLEARLY, A NATURAL FIT FOR YOU…
Yes, I think so. They have a lot of previous experience working with Icelandic artists and they are doing really well as a label. They all want to help as much as they can – and you can feel the family vibe between people.

SO, WHAT MIGHT IT BE ABOUT ICELAND THAT GIVES A CERTAIN MOOD TO THE MUSIC IT PRODUCES?
I don’t know if it’s something about Iceland, but I think it does help coming from such a small community. The population is 330,000 people. There is not really such a thing as a mainstream in the music scene. People are just doing what they think is cool and they’re doing it only for the fun and for the pleasure of making music.

YOUR SOUND HAS BEEN COMPARED TO BON IVER, JAMES BLAKE, FLEET FOXES…
I like all those artists that you mention, but I also listen to other electronic stuff such as Mount Kimbie, Baths, Gold Panda and more… I’ve always been into Thom Yorke. I really like The Tallest Man On Earth. I have also always looked up to my brother who is in a reggae band called Hjálmar… So the influences come from very different directions.

HAVE YOU MADE HEAVIER SOUNDS IN THE PAST?
No. It’s always been mostly just acoustic, written mainly on piano and acoustic guitar.

I ASK BECAUSE YOUR FAVOURITE BAND IS NIRVANA… WAS IT NIRVANA THAT INFLUENCED YOU TO START PLAYING?
I started playing the classical guitar when I was 6 years old and I started listening to grunge shortly after that. That, however, wasn’t so much what kept me into music. It was more like the cool thing to listen to in my home town, I think. But, of course, I fell in love with it at the time…

DO YOU THINK YOUR MUSIC MIGHT DEVELOP HEAVIER LEANINGS?
I have no idea about that. But I hope it will keep developing and changing as long as I live to keep the fun in it. 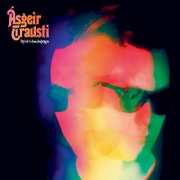 DO YOU GET MUCH TIME TO LISTEN TO OTHER STUFF THESE DAYS?
Yeah. These days I’m listening a lot to Thom Yorke’s new stuff, the Atoms for Peace thing. The record AMOK is a masterpiece.

YOUR DEBUT ALBUM – DYRD Í DAUðATHOGN – HAS BEEN SUCCESSFUL IN ICELAND, BUT HOW DID YOU GET TO THE POINT WHERE YOU WERE RECORDING THAT? HAD YOU GIGGED MUCH?
Prior to recording DYRD Í DAUðATHOGN I was in a band called The Lovely Lion. I played guitar and piano… But I’d never played my own music for any audience when we started making the album.

THE ORIGINAL ICELANDIC LYRICS WERE A COLLABORATION WITH YOUR FATHER, AND A FRIEND…
Yeah. Not so much of a collaboration – but my father, Einar Georg, wrote seven of the lyrics on the album. And my friend, Júlíus Róbertsson, made three of them.

THE ALBUM IS OUT IN THE UK THIS AUTUMN, IN TRANSLATED FORM…
The idea from the beginning was always to do an Icelandic version first and then an English one. And shortly after the Icelandic release we got offers from some labels and we decided just to go for it and translate it to be released world-wide as IN THE SILENCE.

JOHN GRANT HAS TRANSLATED… HOW WAS IT WORKING WITH HIM?
It was very nice working with John Grant. He is a really down to earth guy and he knows what he is doing. And I think the collaboration with him worked out really well.

WERE YOU A FAN OF HIS TWO ALBUMS?
Before someone told me about John Grant – about a year ago – I didn’t know who he was… But after listening to his albums, yes, I became a huge fan of his work. It has really been an honour working with him.

YOU SUPPORTED HIM ON HIS UK TOUR IN MAY THIS YEAR…
That went really well. He has a very good crowd in Britain and they seemed to enjoy our music too, so that worked out very well.

HOW DID YOU GET HIM INVOLVED WITH THE ALBUM?
We were wondering how we should go about making the English translations – and a friend suggested that we’d get John Grant to do it! So we wrote him an email, and he liked the idea and shortly after that we met. We just sat down and had a cup of coffee, and we talked about how we should go about this. As it turned out we were on the same page, with the same ideas and so shortly after that we started working together.

DID YOU NEED TO RESTRUCTURE YOUR SONGS? OR DID MUCH OF THE MEANINGS HAVE TO CHANGE TO MAKE NEW LYRICS FIT?
No, actually… The original recording of the album stays the same. The only thing that is different are the lyrics. The main thing for us in the translation process was to get the same meaning across – so it’s actually more or less a direct translation.

IS THE ENGLISH VERSION LIKE “A JOHN GRANT VERSION OF ÁSGEIR” ..?
No, not at all. Although he helped us a lot with the translation the main thing with him was to have an English speaking person with us to get it all right. And off course it helped a lot that he is also a great musician and understood us better because of that.

I’VE BEEN LISTENING TO SOME OF YOUR SONGS IN ICELANDIC AND, FOR A NON-ICELANDIC SPEAKING ENGLISHMAN, THERE’S SOMETHING REALLY INTERESTING ABOUT NOT BEING ABLE TO UNDERSTAND THE LYRICS. IT CREATES A DIFFERENT MOOD, LIKE THE MUSIC AND THE VOICE BECOME ONE THING…
The fact is that most people really just close their ears when they hear something in other languages. At least in Iceland. Most people just listen to music in their native language or in English. Even apart from that it was always our idea right from the beginning to make an English version of the album. We are basically just doing what we decided a long time ago, even before we were thinking about a worldwide release. I can only speak for myself and the people around me and we like the English outcome. I don’t think there’s any magic lost. The meaning is still the same. It’s just in another language. People that prefer Icelandic version can simply just continue listening to that and ignore the English version!

I’VE BEEN LISTENING TO THE TRACK SUMARGESTUR QUITE A BIT. IT’S REALLY BEAUTIFUL… WHAT’S THAT ONE ABOUT?
See – it’s always nice to know what a song is about! It translates as SUMMER GUEST. It’s about a bird that brings the summer to us, and how that fills us up with joy and how we always want the summer last a little longer. The lyrics are by my father Einar Georg. Here’s the English translation for you:

DOES ACCEPTANCE IN THE UK ACTUALLY MEAN MUCH TO YOU?
It’s not about that. I’m not a lyricist – at least not yet. When I write songs I sing gibberish lyrics to them that sound like English. When we made the album in Iceland we decided to start out with Icelandic lyrics, it could just as well have been English. It was just one of those decisions. We thought it would be a fun experiment to make two versions of the same album. We never dreamt of the success of the Icelandic album so with the English version we wanted to reach a broader audience across the world, not just the UK or in the US.

SO, WHAT ARE YOUR HOPES FOR THE ALBUM?
I never have any high hopes for anything… I think it must be every musician’s dream to be able to make a living of their music and you need an audience to do that  – but people just have to decide whether they like the record or not. I don’t care – I just hope that I will be able to keep writing music and recording as long as I can…

Ásgeir’s UK debut album – IN THE SILENCE – will be released on One Little Indian in the Autumn. A free EP (The Toe Rag Acoustic Sessions) is available to download here, and his new single KING AND CROSS is available on iTunes, here, from 12th August. Stream the B-side – LUPIN INTRIGUE – above.