TYING IN WITH 2013’s ONGOING BBC RADIO 2 SERIES, STUART MACONIE’S NEW BOOK – THE PEOPLE’S SONGS (THE STORY OF MODERN BRITAIN IN 50 RECORDS) – OFFERS SOME NEAT LEFT-OF-CENTRE SOCIAL THEORISING DURING A LIGHT ON ITS FEET JAUNT THROUGH FIVE DECADES OF MUSIC. 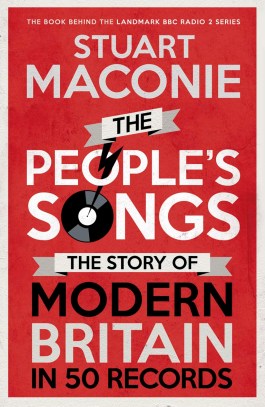 Launching with the sentimental strains of Vera Lynn’s WE’LL MEET AGAIN and landing at the deranged pop grime of Dizzee Rascal’s BONKERS, a single song per chapter is the starting point for discussion on a wide variety of issues encountered by Britain as she moves inexorably through the startling changes of her post WW-II years.
On occasion Maconie’s notes are close to the music itself – STARMAN focuses on David Bowie – while on most others he writes broadly. THE YING TONG SONG discusses the absurdities of island humour, JE T’AIME unfolds changing attitudes towards sex, Y VIVA ESPAÑA focuses on holiday-making… And so it goes, through SOLSBURY HILL (countryside), GHOST TOWN (race relations) and DO THEY KNOW IT’S CHRISTMAS? (charity, celebrity).
Sections on WANNABE (girl power) and CIGARETTES AND ALCOHOL (laddism) are particularly though-provoking; Maconie reveals that Gracie Fields paid for all servicemen and women to travel free on the trams and buses within the boundary of her home town Rochdale, and reasons that the “odious” logical conclusion of the UK’s preoccupation with loveable rogues (a line traced back through Mr Punch to the porter in MACBETH making knob gags in the midst of a murder) is a “bullying misogyny masquerading as wit”.
Each of the broadcaster’s factually stuffed but easy on the brain musings is delivered across seven or eight pages. The beauty of THE PEOPLE’S SONGS – other than its broad frame of reference and amiable wit – is that the bite-size chunks which make it easily digestible in a couple of sittings leave a real hunger for more.