NOT QUITE YOUR STANDARD DOUBLE ALBUM, IAN McCULLOCH’S HOLY GHOSTS PACKAGES TOGETHER A DISC OF NEW STUDIO MATERIAL WITH A SECOND CONTAINING LIVE ORCHESTRAL REWORKINGS OF OLD FAVOURITES. 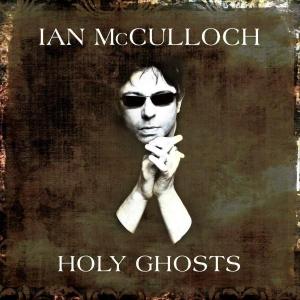 Studio disc PRO PATRIA MORI (“die for one’s country”, for those born without the ability-to-Google gene) is the Echo & The Bunnymen frontman’s first solo album in a decade, originally released in limited quantity last year following a fan-funding campaign.
Never one to knowingly undercook things McCulloch assured, with spicily positioned punctuation, that PRO PATRIA MORI would contain “…some of the best songs ever written. In the history of time”.
It doesn’t, of course, but God loves a tryer or a decent chef. Ultimately, the new album is unlikely to feature highly on any ‘McCulloch essentials’ menu, but does contain one or two tracks that may come to be considered amongst the best of his time. It’s a perfectly fine record in-and-of itself, perhaps an occasionally more delicate affair than one might have come to expect from a songwriter so wilfully steeped in grizzly middle-aged melancholia across recent Bunnymen albums.
It’s a genuine surprise when it begins with simple childlike melodies. McCulloch’s early Leonard Cohen fixation is immediately apparent, once more: the gently bucolic tone of DIFFERENT TREES plays like a sepia snapshot of little Lenny on a swinging tyre. Sixties pop-pastiche (and accidentally half-redundant) ME AND DAVID BOWIE reflects on the Starman’s character-building influence on a teenage McCulloch, while repaying the debt by simultaneously asking “what’s gone on?” to have caused a decade-long absence. WATCH ME LAND, with occasional sonic nods to 1973 Bowie, has the kind of expansive melody which would reach the back of a stadium in the hands of U2 or Coldplay, while closer SOMEWHERE IN MY DREAMS is a masterclass in working the dramatic space between hushed intimacy and string-laden reverie.
‘Deluxe’ or ‘tour’ editions of relatively recently issued albums has been an annoying trend for quite a while, the addendum usually being no more than five or six live tracks. Here, McCulloch attempts to make a virtue of that enterprise by packaging PRO PATRIA MORI with the fifteen live cuts on ORCHESTRAL REWORKINGS FROM THE UNION CHAPEL, under a ‘validate all’ title. But there is no clear conceptual connection between the two records and it is, of course, the live disc which, for most, is likely to clinch the HOLY GHOSTS deal.
Opener BRING ON THE DANCING HORSES is sweeping and grandiose; NOTHING LASTS FOREVER is cowed and broken until a defiant and soulful middle section – Wilson Pickett’s MIDNIGHT HOUR – offers redemption; strident, epic strings and spooky textural guitar floating around what was once THE KILLING MOON’s mandolin line illuminate the song anew.
Recorded in London last Spring, and featuring fellow Liverpudlian Ian Broudie (producer of Echo & The Bunnymen’s PORCUPINE), the album documents a hugely successful exercise in reinterpretation. Despite being more of an acoustic set with string accompaniment (the orchestra turns out to actually be ‘only’ a quartet), the majestic string arrangements are close to being as fresh and invigorating as they must have sounded in McCulloch’s head.
Almost ironically, the overall effect of ORCHESTRAL REWORKINGS FROM THE UNION CHAPEL’s organic approach is that it’s rather electrifying.