“IT WAS ALREADY DARK WHEN I GOT HERE,” SAYS MARK MORRISS FROM THE STAGE OF A HALL FILLED WITH A CROSS-SECTION OF AN ENTIRE VILLAGE’S COMMUNITY, “AND I THOUGHT ‘BLIMEY, STRAW DOGS’… BUT IT’S BEEN REALLY LOVELY, ACTUALLY. AND I’M SORRY ABOUT DROPPING THE C-BOMB EARLIER”. 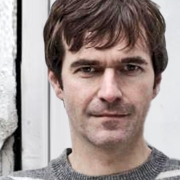 Morriss has just played an hour-and-a-half of songs from his new album A FLASH OF DARKNESS alongside a clutch of surprising cover versions, and some choice cuts from The Bluetones back catalogue. Peppering his set with cheeky humour, he’s also remarked on how honoured he is to be treading the same boards recently graced by Gardeners’ Question Time, given up his thoughts on washing hands when visiting the toilet (“I do mine before, because ‘it’ is actually always the cleanest part of my body”) and accidentally dropped ‘the c-bomb’ (David Baddiel, since you ask).
The Mouth Magazine briefly interviewed Morriss backstage at last summer’s Galtres Festival with the promise of talking at length once his album was released and so, just after the close of tonight’s gig, we reacquaint. “We’ll do the interview in my hotel room,” he says, all smiles as he packs away his acoustic guitar, “but, man, first I got to have a cigarette”. So we’re outside the front of the venue smoking as members of his audience drift away, some more noisily than others. Most are surprised to see him there, perhaps not used to encountering a bona fide chart musician as approachable. A girl unsteady on her feet, clearly partaken of the designated driver’s share of wine as well as her own, begins to sing the opening lines of SLIGHT RETURN in an effort to impress Morriss, but he doesn’t notice, too busy talking football with one of the other locals. “It’s not working,” her friend tells her. “Fuck it. Let’s get some chips,” she says, high heels tottering percussively down the road.

Morriss is staying overnight at the pub / guest house next to the Town Hall, and a small crowd gathers in anticipation of the lock-in the landlord has promised in honour of the evening’s guest – a man who enjoyed a fistful of Top 10 singles and a number one debut album in the mid-1990s as part of The Bluetones, a band that released a further five collections and enjoyed a reputation as a fantastic live act. Since their friendly disbanding a couple of years ago, Morriss has carved out a solo career based on melodic songs with well-wrought lyrics and wry personality. Off stage, as on, he’s funny and charismatic.
Here, tonight, he has already been handed the key to the pub, and a group of villagers gathers at its door behind us as we enter. There are many more new friends inside, each pleased for the opportunity to share a pint with him, and vice versa. It’s difficult to see how Morriss is going to get away from the village in the morning without his body reconstituted as alcohol, nor his Christmas card list extended by 100 names.

Before the late night can become wee small hours, we go upstairs to his room to record our chat about the new album – though we find ourselves ripping apart the government for a good 10 minutes before we begin. When the conversation turns to ex-Prime Minister Gordon Brown the room becomes a chasm of frustrated sighs and, then, silence. Morriss voices annoyance with the cult of personality developing much more strongly in UK politics and, in the case of current Labour leader Ed Milliband, finds the “he looks a bit foreign and he’s got a speech impediment” prejudices offensive. Both of us express admiration for a forgotten speech by Neil Kinnock which had surfaced online earlier in the week, and one of us mentions his association with Billy Bragg – which finally brings us back round to music and reminds us we have some recording to do. “Hey, Gringo! There is a new Mouthcast in town”…