SOMETHING WONDERFUL HAPPENS ACROSS THE COURSE OF THIS BEAUTIFUL FILM, WHEN ARCHIVE FOOTAGE OF ‘ORDINARY PEOPLE’ GOING ABOUT THEIR BUSINESS IS REMOVED FROM ITS ORIGINAL CONTEXT AND SET OVER EVOCATIVE NEW MUSIC COMMISSIONED FROM BRITISH SEA POWER. 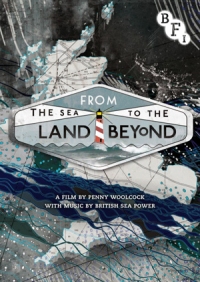 The Brighton-based band’s own work has long carried white spray and salt air in its DNA, so their sprawling extra-curricular score for a 2009 reissue of 1934 documentary MAN OF ARAN was, unsurprisingly, a perfect fit.
Here they surpass that soundtrack, finding new depths in their benign atmospheres, this time in support of Penny Woolcock’s eye.
The vast majority of the visuals in her love-letter FROM THE SEA TO THE LAND BEYOND – which offers a chronological picture of the UK’s relationship with its shorelines throughout the 20th-Century – are compiled from hundreds of hours of newsreel and documentary short works from the BFI’s vaults, including some by Mitchell and Kenyon.
The assemblage is masterful. There’s no guiding commentary – just what feels like a 73-minute long continuous piece from British Sea Power (though it contains fragments of previously released songs), and the occasional sound effect – so nothing intrudes on the visuals to tell us what we’re about to see, what we’re now seeing, or what we’ve just seen. Penny Woolcock’s film is all the more engaging for its equalising by stripping away context and explanation. The pictures speak for themselves and, as they wash through you, the film is by turns surprising, frank, stirring, funny and poignant without romanticising.
One moment we’re seeing groups of young men indulging in laddish games by the seaside, the next we’ve cut to them marching off to more in the First World War. Ahead 25 years and we see a bomber under construction in a factory, then fighter planes gunned down and crashing into the ocean. Fleets of troop carriers head out ominously across grey for the D-Day landings, and military parades remind that tens of thousands from the Caribbean, the Middle East and Africa volunteered to fight for England during the Second World War.
Elsewhere, factory workers in their hundreds herd through the gates at the end of a shift. Groups of prim maids and then informal male crew members pose on the deck of an ocean liner, all in reverence to the camera. A troupe of graceful young women dance in formation on a beach. A swarm of holiday makers covers the promenade in Blackpool like a plague of ants. A half-drowned man is resuscitated on a dock. Ships are built. Fish are farmed.
In positioning the stories of these ‘ordinary people’ side-by-side – maritime crews, fishermen, dockers, dancers, seaside holiday makers, shipbuilders, soldiers, lifeboatmen and children – something rather profound happens when the bigger picture emerges.
As generations grow and then recede, industry rises and then falls, two global wars come and go and technology fastens us in its grip, Woolcock holds our temporary time here, our humanity, up to the elements. Unchanging, the sea moves in and out, day to day, month after month, year upon year. Against that reassuring and never-ending constant, the long-gone people in this film (some of them staring into us with challenging curiosity as we stare at them on the screen) all seem to say the same thing: “live”. It’s almost unbearably moving.

FROM THE SEA TO THE LAND BEYOND is released on DVD this week. The BFI has very kindly donated a copy as a giveaway for one reader of The Mouth Magazine. Email our usual address (see CONTACT), and we’ll draw out of a notional hat for the lucky recipient in a week’s time.