MY LAST MEMORY OF ANDY WHITE IS OF THE BACK OF HIS HEAD. SCARF LOOSELY WRAPPED AROUND NECK THEN TRAILING OFF OVER ONE SHOULDER WITH IMPRESSIVE COOL, THE PEPPERINESS OF HIS HAIR PLAYING IN THE MOONLIGHT, IN MY MIND HE WAS WHISTLING SOME CAREFREE TUNE. 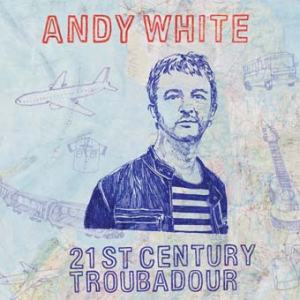 Plied with red wine and filled with the kind of insoucient bonhomie which comes with having travelled a bit and met some folk, he strolled off up the street carrying the guitar case which housed his engine of survival.
In the intimate low-key venue around the corner he’d just delivered the sort of big-hearted gig you know only a true off-the-cuff raconteur can.
The moment had been the jangling circular chords and cascading piano of LOOKING FOR JAMES JOYCE’S GRAVE, half-spoken as if channeling Lou Reed through a Belfast lilt, and which romanticised a poetic quest in the face of what seemed to be a dose of the old heavy spiritual restlessness. I’d also had red. It may have just been a lighthearted road movie.
‘Back to mine’, and the evening was capped off with more wine and laughter: White’s philosophically salty take on the work and merits of U2, modest tales of a life which has seen him work with Sinead O’Connor, Peter Gabriel, the Finn brothers and Van Morrison, plus an impromptu boogie-woogie session from his piano player Radoslav which completely blew the dust off – and out of – the neglected baby grand in the corner of the living room.
The next morning I’d found a lonely paperback book nestled amongst the flowers in a hanging basket outside my front door. It was not written by James Joyce. White had inspected the bookshelves the previous night and, for some still unfathomable reason, focused with intent on footballer Peter Beardsley’s autobiography. “Why?” he’d asked. “I’ve no idea,” I’d replied.
“It’s in good condition,” he’d said, eyes glistening mischievously over the top of the glass he sipped at and smiled into. Catching the drift of a deadpan game’s opening move, I’d pressed the unread into his hand, insisting he take it away with him. Looking like a goalkeeper who’d conceded but knew there were 89 minutes left to play, he’d slipped it into his jacket pocket.
I relate this story not to disingenuously show off about, as you will no doubt suspect, previous ownership of the odd florid hanging basket, but to offer up a little of the sort of unpredictable colour you might expect to find within White’s new release.
Double CD 21ST CENTURY TROUBADOR, out next week through Floating World, is connected to a book of the same name. Semi-autobiographical, it’s an often funny and frequently enlightening notepad account of life on the road, filled with anecdotes and musings which will have you both laughing out loud and staring into the middle distance lost in thought.
The first disc is a ‘Best Of’ in miniature – a selective collection of previously issued songs from his ten album back catalogue, all of which are referred to in the book. The cosmopolitan cool of ITALIAN GIRLS ON MOPEDS (of which White says “step off the plane and you’re starring in your very own movie”), TRAVELLING CIRCUS and JESUS IN A CADILLAC are the highlights.
The second CD is an engrossing curio, what White describes as “an audio book with a soundtrack”. It contains a be-bop poem from STOLEN MOMENTS (a previously published volume of verse), six readings from the new book set to music and a brand new song recorded in Melbourne, Australia, where he’s set his cap for several years.
The titles of the readings alone set their tones beautifully. SO FOCKING GAY relates, in White’s words, “the story of when the troubadour stumbles into a late night party with his sister. Both of them attract intense interest from a remarkably drunk man of indeterminate provenance.”
BOB, PATTI AND THE BACKDOOR CREW (“… a recording session in Vancouver is interrupted by a visit to an alleyway beside Bob Dylan’s stage door”) and STING IS HOT (“the title says it all”) are equally amusing, while IN BETWEEN TIMES (“… an epiphany in three parts, flying over Ireland en route from London to Canada”) is rather touching.
White is about to tour the UK (dates listed below) in support of 21ST CENTURY TROUBADOR. Playing the long game, I’ll be there with the intention of slipping Peter Beardsley’s autobiography into his guitar case while he’s not looking, too busy quietly charming his audience with what he once modestly referred to as “the music of what happens.”