“A DOG IS FOR LIFE, THIS ALBUM IS FOR CHRISTMAS…” TWEETED LISA HANNIGAN LAST WEEK, ABOUT THIS NEW FUNDRAISING COMPILATION CURATED BY SINGER-SONGWRITERS CATHY DAVEY AND NEIL HANNON. 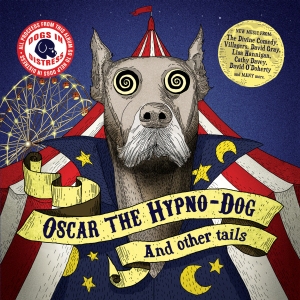 Featuring fresh recordings from – amongst others – Hannigan herself, Villagers and David Gray, plus Hannon’s Divine Comedy and Davey, it’s an impressively pedigree collection of 15 canine-themed love songs.
The organisation to benefit from the proceeds of Hannon and Davey’s charitable coordination is the Dublin-based Dogs In Distress.
Everyone involved has donated their time, recordings and royalties free of charge so everything raised is due to go directly to the charity.
“I’d been trying to figure out how to raise awareness for homeless dogs without it becoming a negative campaign,” says Davey. “I wondered how many songwriters would be interested in writing songs about dogs they have loved. It turns out nearly everyone I approached had a story to tell…”
Jeremy Hickey’s instrumental project RSAG contributes DIGGING, insistent rhythm suggesting single-minded four-leggers up-earthing gardens in the hunt for lost buried bones. Sharon Shannon and David Gray also contribute instrumentals – TOP DOG GAFFO, all Shannon-signature accordian trills and fetch-ball playfulness and, from Gray, lazy piano lilts in the one-eye-open blanket stretch of MORNING THEME.
David Turpin’s FUR is a gently affecting song of courtship from one dog to another, spectral backing vocals floating over an electronic beat and ambient keyboard, briefly recalling 10CC’s most famous moment. Rhob Cunningham’s JET’S SONG is what Paul Simon’s GRACELAND might have sounded like had it been recorded in a dog pound, and Villagers’ CASEY THE WONDER DOG is another of Conor O’Brien’s respectful nods to the Simon songbook.
Hannigan’s I DON’T KNOW WHAT WE’RE FIGHTING FOR is a welcome addition to her offbeat line of delicately skeletal efforts, only pawed guitar and lightly melancholic piano supporting the amusingly odd-couple lyrics of weary apology: “What was it this time? Was it the nappy I pulled out of the bin – or this delicious stuff I brought in on my chin…  …also from the bin..?”
The axis of the album is Harry Holler & The Hooligans (essentially a Hannon-fronted pack of big-hearted mongrels) rowdily performing the top dog patrolling his pavement Johnny Cash swagger of ONE EAR UP, ONE EAR DOWN.
If the aim is undoubtedly true but the concept seems a little twee, the collection itself turns out to be unselfconscious and warmly rounded fun, full of character and with wag in its tales.