STAND-UP MARK THOMAS – A VETERAN OF SEVERAL TV AND RADIO SERIES BLURRING THE LINES BETWEEN COMEDY AND INVESTIGATIVE JOURNALISM WHILE COVERING LEFT-FIELD ASPECTS OF POLITICAL AND SOCIAL CULTURE WHICH MIGHT OTHERWISE REMAIN UNREPORTED – IS CURRENTLY TOURING HIS NEW SHOW BRAVO FIGARO. 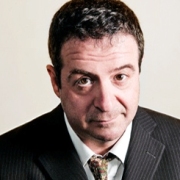 More personal than Thomas’s previous work – though still enflamed by a keen-eyed sharpness and rapid-fire sardonics – BRAVO FIGARO is by turns moving, funny and enlightening. It focuses on events surrounding his Dad’s incurable degenerative illness, and the power of music (in this case opera) to break down boundaries.
Mark recently talked to The Mouth Magazine about some of his achievements during the last 25 years of raising social and political awareness through comedy – including his walk along the entire length of the Israeli Separation Barrier, the development of a People’s Manifesto, and taking a tank through the drive-in of a McDonald’s fast food restaurant. He also tells us why and when he became an atheist and, of course, all about BRAVO FIGARO.