IT’S A FACT THAT ANY 1980s STUDENT BEDSIT WAS INCOMPLETE WITHOUT THE ALBUMS LONDON 0 HULL 4 BY THE HOUSEMARTINS, RATTLESNAKES BY LLOYD COLE & THE COMMOTIONS, AND EDEN BY EVERYTHING BUT THE GIRL. 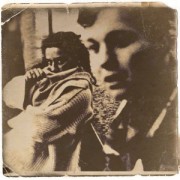 However, forcing itself somewhere near to the middle of that essential pile by sheer good-willed bonhomie alone was BOAT TO BOLIVIA, the 1986 debut release from Geordie giddy-boys Martin Stephenson & The Daintees.
GLADSOME HUMOUR & BLUE (1988), SALUTATION ROAD (1990) and THE BOY’S HEART (1992) followed, each of the quartet packed with examples of The Daintees infectious musical fraternity, and each showcasing songwriter Stephenson’s unassuming gift for delicate emotional observations filtered through a surprisingly left of centre and antique point of view which singled him out as standing almost entirely at odds with the spiritually bankrupt and modernity obsessed 1980s.
The song LITTLE RED BOTTLE, for example, dealt with alcoholism from a defensive standpoint, almost-hit WHOLLY HUMBLE HEART reflected on human desire for comradeship regardless of the constraints of sexuality, SLAUGHTERMAN was a defiant rebuke to those who choose to dismiss the dreams of others, told from the perspective of a want-to-be footballer, while THE OLD CHURCH IS STILL STANDING, though not an evangelically religious song, celebrated not only the longevity of church buildings but also an idealised version of the sense of community and spirituality found within.

In 1992, Stephenson realised that his destiny lay along a different path to those around him. Tired of the pressures of the music industry, he disbanded The Daintees and set about dismantling his whole life. There was serious reprogramming to undertake, and he entered what he calls “an apprenticeship” with guitarist Gypsy Dave Smith. Now, twenty years on, Martin Stephenson talks to The Mouth Magazine about those four Daintees albums, and a two-decade journey from unhappy major-label pop-star to highlands-based cottage-industry troubador…