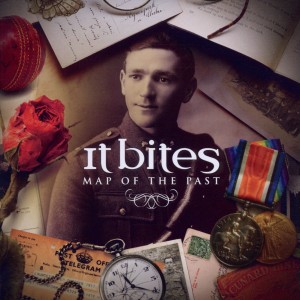 WHAT IT SOUNDS LIKE: Cumbrian prog-rock should probably sound like a wet one-eyed alsation, string-tied to the tin walls of a rattling lash-up lean-to, and chewing a tourist’s severed arm on a piss-soaked mattress. Egremont’s much-maligned It Bites have managed to be more elegant, though often less enthralling, across their 26 years. This new album is a reasonably stately – but occasionally leaden – meander through the emotional minefields of war and memory. It does, however, carry a couple of genuinely surprising and affecting moments amidst the souped-up bombast, occasionally try-too-hard melodies and impenetrably perfect playing – opener MAN IN THE PHOTOGRAPH is the best of its bunch.
WHAT DOES IT ALL MEAN?: Without record company mandates or the spark of Francis Dunnery, It Bites have comfortably positioned themselves in the post-Fish Marillion zone. This is an earnest and honourable attempt but with narrow charms, and won’t see their constituency expand.
GOES WELL WITH… … a second listen to previous album The Tall Ships. The subject matter is far darker this time, but the overall impression is much lighter by dint of MAP OF THE PAST being less deliberately showy, and far shorter.
MIGHT SUIT PEOPLE WHO LIKE… … a York Notes version of Pink Floyd’s THE FINAL CUT.

First published online by Word Magazine and the 7Digital homepage