THE SILENCE SINCE DAVID BOWIE’S LAST PUBLIC OUTINGS (THREE SONGS WITH ARCADE FIRE AT 2005’s FASHION ROCKS, FOLLOWED BY A ‘BEST OF’ SET AT A NEW YORK CHARITY EVENT PLUS COMFORTABLY NUMB WITH DAVE GILMOUR AT LONDON’S ALBERT HALL IN 2006) HAS BEEN QUITE DEAFENING.

Occasional back-catalogue reissues (THE RISE AND FALL OF ZIGGY STARDUST AND THE SPIDERS FROM MARS plus STATION TO STATION, both in multi-disc deluxe edition) have been welcome in turning up remastered versions, 5.1 mixes and previously unheard curios.
But, ultimately, neither offered easy escape from the creeping assumption that Bowie would never be heard from again – at least in artistic terms.
“I’m comfortable,” he told the New York Times in 2005. Reports of domestic bliss, not to mention a gentle recovery from the heart attack which cancelled out the latter stages of A REALITY TOUR in 2004, offered up a notion of the Grand Old Dame sliding easily into retirement. Yet, seemingly out of nowhere this week, on 8th January – Bowie’s 66th birthday – details of a new album (THE NEXT DAY, to be issued in March) emerged.
Long-standing producer Tony Visconti (responsible for a run of classic albums – YOUNG AMERICANS, LOW, “HEROES”, LODGER, SCARY MONSTERS (AND SUPER CREEPS) – plus the turn-of-the-century returns to form HEATHEN and REALITY) has described the album as “a mixture of Classic Bowie and Innovative Bowie”.
Knowing the artist’s predisposition for hiding in his material, and for offering up the wilfully skewed, what the pitch and the sonics for THE NEXT DAY might be are anybody’s guess. 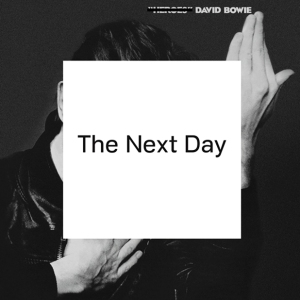 As a statement of intent, the sleeve is interesting – subverting the original cover of “HEROES” (1977), by crossing out the title and placing a simple text card over the famously cool black-and-white image of Bowie’s face.
They do say you end up with the face you deserve – so after almost a decade apart, which one does Bowie feel we merit being presented with?
“Obscuring the “HEROES” cover is about the spirit of great pop or rock music – about it being ‘of the moment’, forgetting and obliterating the past,” Jonathan Barnbrook, its designer, explains. “However, we all know that this is never quite the case. No matter how much we try, we cannot break free from the past.”
The cover of THE NEXT DAY, then, appears to be concealing to reveal. If the last couple of albums (with their less obscured emotional pitch) were a signpost, and the new album is some sort of destination that they were pointing to, an educated expectation might be for THE NEXT DAY to be imbued with a contemplative and open later/mid-life honesty: something that’s as realistic, reflective and resonant as you’d hope a 66-year-old survivor would be.
Sounding like a bookend to 1970’s beautifully melancholy CONVERSATION PIECE is the intriguingly fragile and backward looking new single WHERE ARE WE NOW?, which references Bowie’s Berlin period. View the video here:

ALSO RELEASED THIS WEEK IS BARRIERS, THE FIRST FRESH MATERIAL FROM SUEDE SINCE THEIR REFORMATION IN 2010.
Trumpeting the arrival of new album BLOODSPORTS (March), the song is a welcome return of the band’s enormously romantic swell and grandeur. “It isn’t the first single – but we are proud enough of it to just chuck it out there,” says frontman Brett Anderson.
Single IT STARTS AND ENDS WITH YOU is released next month. BARRIERS is available here as a free download.